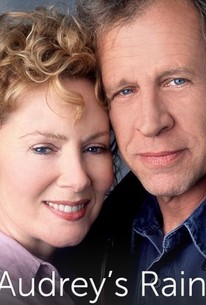 Having promised her dying mother that she would always look after her two young siblings (one of whom is mentally challenged), Audrey Walker (Jean Smart) has deliberately closed herself off from romantic relationships -- and indeed, from most of the other pleasures in life. Now in middle age, Audrey has devolved into a bitter, sharp-tongued spinster, resenting the manner in which her family has robbed her of a life of her own. Thus, Audrey is none too thrilled when, after her married sister commits suicide, she is saddled with raising the dead sibling's two children. Be assured, however, that our heroine's misery will be alleviated when her former boyfriend, Terry Lloyd (Richard Gilliland), comes back into her life to help her with her new responsibilities. Strategically scheduled to air on Mother's Day (or to be precise, on May 11, 2003), the made-for-cable Audrey's Rain was a presentation of the Hallmark Channel.

There are no critic reviews yet for Audrey's Rain. Keep checking Rotten Tomatoes for updates!

Aaaaack, until I read the synopsis, I had no idea that this is a Hallmark movie. I guess it follows the pattern. Audrey has devoted her life to looking after her mentally challenged sister, and her other sister's kids. As a result, she has had no life of her own. Along comes her former boyfriend, who is back in town selling his family's property after his wife passed away, and sure enough, the sparks start flying again. It is interesting to find a movie that features a challenged kid so prominently. You don't see that very often.