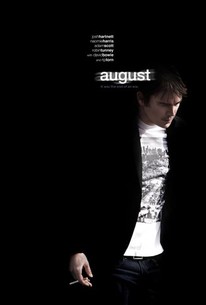 Josh Hartnett, Naomie Harris, Rip Torn, and Adam Scott star in director/co-screenwriter Austin Chick's tale about an ambitious dotcom entrepreneur attempting to stay afloat as the stock market begins to collapse and the entire country remains blissfully unaware of the national tragedy looming ever closer on the horizon. Tom Sterling (Hartnett) is on a professional downward spiral that's rapidly cutting into his personal life as well. His apathetic investor, Ogilvie (David Bowie), is refusing to relinquish control of the company that Tom is fighting to save, and his girlfriend, Sarrah (Harris), seems to have lost all interest in their relationship. In the midst of all this, Tom must also attempt to heal the wounds that have kept him estranged from his father, David (Torn), and brother, Joshua (Scott), as well.

Anyone who thinks that Josh Hartnett isn't a true movie star should see his riveting, high-wire performance in August, a shrewdly dramatized look back at the bursting of the dot-com bubble.

Only an amusing cameo by David Bowie enlivens things, but he's onscreen for just about two minutes at the end.

There's not much to it, but Austin Chick's hyper-focused indie does serve as a nicely assured showcase for lead Josh Hartnett.

Has a dark desperation thatâ(TM)s morbidly compelling. But the movieâ(TM)s amoral momentum is fatally slowed by an acronym-heavy script and flimsy characterizations that offer fine actors...little to play.

August is a brooding, boring indie drama about the death of the culture-wide hallucination that was the dot-com bubble, and the moment when countless dot-com millionaires on paper became real-life paupers.

This one has nothing extraordinary about it to compensate for seven years' staleness.

A movie that makes a good initial public offering.

If you want to see ignorant self destruction, see Troy Duffy in "Overnight" and forget this film---the worst mistake Josh Hartnett has made in his career.

While this modest indie offers high-tension plotting, it's real substance is the contrast between Hartnett's charismatic, hard-charging business persona and his intimacy-challenged real-life relationships.

...the picture ... provides Josh Hartnett with one of his most interesting roles, and it elicits one of his sharpest performances.

This stylish, well acted drama chronicles one once-successful dot-com's efforts to stay afloat in the wake of the Internet boom's bust.

Interesting solely when viewed as an aesthetic antecedent to The Social Network, with its shadowy interiors and pulsing dark electronic soundtrack, but this is a small story that made for a small movie. There's nothing wrong with small movies, of course, but August's ambitions run deeper; it's got some Very Important Things to say about the stock market, and tech, and Faustian power-grabs. Also noble, but when Josh Hartnett delivers a puerile anti-capitalism monologue halfway through the film and is universally applauded for it, the movie's intentions become both clear and undefendable. The movie discourages us from clashing with Tom Sterling's perspective, and even though that big caps-locked HUBRIS stamp ultimately brings him down, it obviously wants us to see him as a misunderstood, insecure bad boy of business. August's ridiculous bias hits its boiling point with an insane, scenery-chewing performance by Rip Torn, where he growls about Oreos and attacks Josh Hartnett with some quasi-Enron "it doesn't do anything if you can't explain what it does" argumentation. See? He's just trying to prove to his grumpy blue-collar daddy that he can work too. Do you guys get it yet? If you don't, we can repeat the scene almost verbatim forty minutes later. It's hard to tell if Tom Sterling is a failed character because of the script or because of Hartnett's performance. He seems to have a rich understanding of the material (he also produced the film), but I think he lacks the range of expression required to humanize this character. Really, despite what August wants us to think, Tom really just comes across as an incompetent asshole. Short of an effortless deflation by David Bowie late in the film, he's actually part of very few substantial events through the course of the story, so there aren't many opportunities to see him react other than trying to overwhelm his problems with sheer bullheadedness. I guess it's a deficiency of writing, for the most part, but the point is that it's a character piece that fails. It's unique, and not a total disaster, but August is entirely skippable.

The film mainly centers on the charismatic and arrogant character Tom Sterling [portrayed by Hartnett] trying to keep the Dotcom company he started with his genius brother afloat as it begins to fold, spending money frivolously to make it seem as though the company is doing well...all while trying to rekindle a romance with his ex-girlfriend Sarrah [portrayed by the beautiful Naomie Harris]. Great performance by Josh Hartnett - he was brilliant in this film, he delivered quite possibly his best performance and pretty much carried this film. Good supporting performances by Adam Scott ["Step Brothers","Party Down"], Andre Royo ["The Wire"], Robin Tunney ["Prison Break","The Craft"], Rip Torn ["Men In Black"], Emmanuelle Chriqui ["Entourage"], David Bowie [who was only in one scene--which he stole], and Naomie Harris ["Ninja Assassin","The Tomorrow People"]. Great cinematography, directing [by Austin Chick], and good writing. It reminded me of "Boiler Room" at times, mainly because of some of the dialogue and the fact that they never really explained what the company actually did...only that it had to do with the net. Overall this film is an interesting character study, but it kind of drags and it's mainly the stellar performances that keep it going and almost make up for it not being that compelling.

Josh Hartnett's performance in this film, is a good reason to check out the movie. In my opinion, it is one of his best performances, so far. The film reminded me of films like The Prime Gig, Boiler Room, Less Than Zero, Nothing in Common, Up in the Air, American Psycho, and Glen Gary Glen Ross. Adam Scott is also very good, as Hartnett's brother. Scott and Hartnett have a good on screen chemistry. Robin Tunney and Rip Torn are solid in their roles. David Bowie steals the one scene that he is in. The music in the film is good. On a negative, the pacing is off. Also while Naomie Harris was ok in her role, I think another actress in that role, would have done a much better job. She didn't have a good on screen chemistry with Hartnett. Still the film is worth watching for the performances, especially Hartnett's.

[font=Century Gothic]"August" is a flat and cliche-ridden movie about brothers Tom(Josh Hartnett) and Josh(Adam Scott) Sterling who have started an internet company called Landshark that is a huge success, making them the toast of the town. Thankfully, it has less to do with Jimmy Buffett than with Buddhism which is still kind of odd. Josh is the designer and Tom is the public face of the company, seeking to validate himself in the eyes of their professor father(Rip Torn) while living a lavish lifestyle. Josh is much more prudent by living in a modest apartment, apparently saving money for his child's college fund. Tom also wants to continue the revolution his father started. Or so he says.[/font] [font=Century Gothic][/font] [font=Century Gothic]By August 2001, that is no longer an option as the dot com bubble has burst, sending the stock price plummeting. Tom is the last person to realize how much trouble Landshark is in as his employees have stopped working with little to do.(However, they are still too busy to send out resumes.) Since there is nothing left but the funeral, there is little of interest except watching Tom attempt to save his company as the vultures close in. One bright spot for him is reconnecting with his old flame Sarrah(Naomie Harris) who has been living in Spain. Landshark may be without hope but the movie might have had a chance with a decent performance in the lead but Josh Hartnett lacks the magnetism and talent to play such a charismatic heel.[/font]