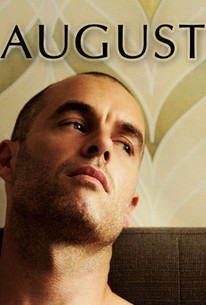 Director Eldar Rapaport expands his award-winning short Postmortem into a complex look at modern romance centering on two lovers bound to the past by their burning passions. In the wake of a bitter break-up, former lovers Troy and Jonathan put half-a-world between themselves just to try and move on. As Troy launches a successful career in Spain, Jonathan stars over again in Los Angeles. Years later, Troy takes a trip to the West Coast, and makes a coffee date with his former beau. The moment they lock eyes again, it's as if they were both transported back to the days where they were inseparable. But as passive aggressive Troy wrestles with the decision of leaving Barcelona Jonathan finds his current romance with Argentinean immigrant Raul starting to suffer.

Mike Vaughn
as Nick
View All

There are no critic reviews yet for August. Keep checking Rotten Tomatoes for updates!

Meaningless drivel that moves at a snail's pace.