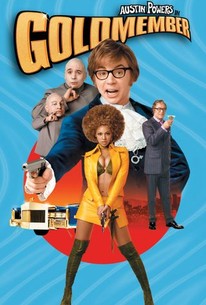 Critics Consensus: While the narrative structure is messy and doesn't make much sense, the third installment of the Austin Powers franchise contains enough inspired bits to entertain.

Critics Consensus: While the narrative structure is messy and doesn't make much sense, the third installment of the Austin Powers franchise contains enough inspired bits to entertain.

Critic Consensus: While the narrative structure is messy and doesn't make much sense, the third installment of the Austin Powers franchise contains enough inspired bits to entertain.

Mike Myers' phenomenally successful spy spoof gains a few more characters, a slew of celebrity cameos, and even more free-associative laughs in this third installment of the popular franchise. Austin Powers in Goldmember continues the exploits of the swinging-'60s leftover, who, as the film opens, is busy critiquing a big-budget Hollywood production of his life story, replete with a 20-million-dollar star in the lead role and a slew of John Woo-style action scenes. But not far from the soundstage lurks arch nemesis Dr. Evil (Myers), who has opened up a talent agency representing some of the industry's biggest stars -- all the while channeling their profits into a diabolical world-destruction plan with the unfortunate code name Preparation H. Dr. Evil presents a distraction to Austin by kidnapping his similarly swingin' father, Nigel Powers, and transporting him back in time to 1975. Travelling there to save his father -- and in turn win back his dad's sometimes-errant affection -- Austin comes across the alluring superspy Foxxy Cleopatra (Beyonce Knowles). The three of them travel back to the present day, where they join forces to battle Dr. Evil and his posse of nefarious evil-doers, including the trusty clone Mini-Me (Verne Troyer); his snotty son, Scott (Seth Green); the inimitable Fat Bastard (Myers); and the eponymous new addition to the fold: the epidermis-obsessed, precious-metal-fortified Dutchman called Goldmember (Myers). ~ Michael Hastings, Rovi

What can we say? See the movie first, then decide.

The third installment in the series of super-spy spoofs, it's handcuffed by the ever-increasing load of baggage it carries.

I think this is the funniest of the three movies and I liked the first two.

It's an ode to indecent joy.

One-ups the Austin Powers sequel that came before it.

The level of inventiveness remains high.

Even the outtakes during the end credits are utterly humorless.

The inclusion of Michael Caine and Beyoncé Knowles lightened the load, but a spread-thin Mike Myers (playing 4 characters) sure made heavy going of everything else.

What more could one want from a third Austin Powers movie that you didn't get from two? With only so much Bond baiting to be done, Mike Myers trains his soft satire on himself for something that feels somewhat self-loathing, but still riotously funny.

The film opened as a spoof of Mission: Impossible - retitled Austinpussy. During the pre-credits sequence "somewhere in Utah," "Austin Powers" parachuted into his driver-less Shaguar, and then ejected himself from the driver's seat...

I expected laughs and instead got a sad spectacle of recycled jokes and lame running gags.

...things went from mediocre to worse in this entry.

The first five minutes of this James Bond parody sets the bar high for the rest of the film and that simply on the strength of it's numerous celebrity cameos. Mike Myers was soooo hot at one time he had the weight to pull this kinda talent (... and then "The Love Guru"). The rest though is more of the same channeling Benny Hill that the series is known for. There's a guilty chuckle or two in all of this silliness despite your valuable college philosophy degree.

Third outing for Powers this time involving the disco era of the 70's and introducing his father with winning results much like 'Indy' did in 'The Last Crusade'. Its Powers, its crazy, its childish, its chock full of sexual innuendo and toilet humour and like the previous two films its part of the best Bond spoof/parody franchise created. We all know what to expect with this and you get exactly what it says on the tin, so to speak. The comedy is as sharp and witty as ever being thick n fast as Myers does his thing with various characters, his new creation of 'Goldmember' being typically dumb but quite amusing, unfortunately we also have to endure his Scottish creation again. There are loads of cameos throughout which do seem a little too much at times I must admit (do we really need to see Spears prancing around and Quincy Jones in a clear pointless ego nod?) but the cast continuity still impresses. The mock intro sequence at the start is a good example of how it can work with Cruise actually looking a dead ringer for the Powers character and sending up his 'M.I.' films perfectly, kudos to Cruise for being able to laugh at himself. The inclusion of Devito and Spacey as 'Dr Evil' and 'Mini me' both hit the nail on the head perfectly also, you could easily do a new film with that cast. The added bonus of Caine playing Powers father is possibly the best bit of casting I've seen for along time, he was born for the role. This time the franchise almost turned into a smutty sexual spoof like 'Flesh Gordon' in places, the comedy is definitely a touch risky where as the second film was smarter with more cultural references and the first being more sensible plot wise if that's possible. Anyway its still great fun with Dr Evil being the highlight for me as always, love his rap, but I can't decide which film is the best, possibly number two.

The last-ditch-effort with celebrity cameos is cheap but still hilarious. I also like the role reversals of Scott Evil and Mini-Me. Beyonce plays the blaxpoitation heroine trope with sass and gusto.

and Dr. Evil. Myers again plays shagadelic secret agent Austin Powers, his arch-nemesis Dr. Evil and horrible henchman Fat Bastard, and now also a new bad guy, the Dutch hedonist Goldmember. I found this movie hilarious and outrageous! It had a lot of crude humor, like Austin hiding behind Mr. Roboto's fountain. But there was also a good amount of self-parody. The best scenes included Dr. Evil's prison rap video, and the suggestive subtitles in Mr. Roboto's office. The several cameos were also enjoyable, especially Ozzy Osbourne pointing out the joke carried over from "The Spy Who Shagged Me." The scene with Godzilla and its copyright was a relevant joke, considering the MPAA's temporary ban on the use of the title "Goldmember." I did have a complaint about the continuity. The difference in Austin Powers' trademark "choppers" was noticeable. And although I'd have liked an explanation for the absence of Felicity Shagwell, I'm glad she was not revealed in the movie as a fembot! Anyway, with this third installment, Austin Powers goes out with a bang! 3 1/2 stars 12-21-02