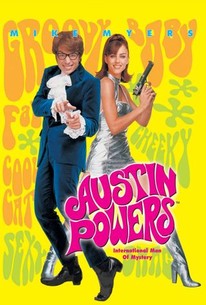 Critics Consensus: A light and goofy comedy which provides laughs, largely due to performances and screenwriting by Myers.

Critics Consensus: A light and goofy comedy which provides laughs, largely due to performances and screenwriting by Myers.

Critic Consensus: A light and goofy comedy which provides laughs, largely due to performances and screenwriting by Myers.

Less a parody of the early James Bond film than a parody of the films that parodied the early James Bond films, Austin Powers: International Man of Mystery stars Mike Myers as Austin Powers, by day a hipster fashion photographer in mid-'60s swingin' London and by night a crime-fighting secret agent. Austin's wardrobe is pure Carnaby Street at its most outrageous, his vocabulary is crowded by the cool lingo of the day ("Groovy, baby! Yeah!!"), and he's irresistible to women, despite the fact that he can be charitably described as "stocky" and has teeth that strike fear into any practicing dentist. When his nemesis, the arch-enemy Dr. Evil (also played by Myers), has himself cryogenically frozen and sent into space, Powers also has himself put on ice so he can be thawed out when Dr. Evil returns. Come 1997, Dr. Evil returns to Earth and is back to his old tricks, so Austin is thawed out and returned to active service -- though he soon discovers his style doesn't play so well 30 years on. The supporting cast includes Elizabeth Hurley as Austin's sidekick, Vanessa Kensington; Michael York as his boss, Basil Exposition; Robert Wagner as Dr. Evil's assistant, Number Two; and Seth Green as Dr. Evil's troubled son, Scott Evil. Ming Tea, the swingin' pop band that periodically backs up Austin, includes real life pop-rockers Matthew Sweet and Susanna Hoffs. Austin Powers: International Man of Mystery was a mild box-office hit but an even bigger success on home video, which led to the 1999 sequel, Austin Powers: The Spy Who Shagged Me. ~ Mark Deming, Rovi

Robert Wagner
as No. 2

Will Ferrell
as Mustafa

Burt Bacharach
as Himself

We may not need as many Austin Powers movies as there are James Bond pictures, but one or two more might be nice.

The originals were spoofs in their own way, too, unless you really believe that secret agents look more like Sean Connery than Aldrich Ames.

A loving paean to Bond, Flint, Helm and their ilk (as well as a myriad of outlandish villains), the film knows its turf and only missteps when it ventures into more contemporary territory.

It would take a stone face not to crumple at Austin's dodgy catchphrases and irrepressible sexual desperation.

Spy movie parodies are common, but Myers is observant enough to notice things that others haven't.

Austin Powers remains a blast of swinging silliness with gags that are not only well observed but affectionate for the era they parody.

Comedy is a lot of hard work, but Myers and co make it look easy, and Austin Powers deserves its place amongst the comedy greats...

Whilst the heavy lifting might fall on Myers, Jay Roach's film is elevated by a series of great supporting performances.

A few stalling subplots slow down the pace of what is otherwise a routinely amusing parody full of hysterical nods to 007 and every other iteration of agents of espionage.

The main joke of the film - and boy, is it flogged to death - is that Powers 'retro, hetero and (in his own words)' shag-adelic 'approach to spying is completely inappropriate in the 1990's. [Full Review in Spanish]

True, it's filled with dated 90's pop culture references, weak dialogue, and jokes that can sometimes descend into 5th grade levels of juvenile humor. But I'd be lying if I said this Mike Myer's "James Bond" spoof wasn't hilarious. Myers does a great job portraying two characters (The Dr. Evil scenes are by far the greatest highlights of the film). It's fun stupid comedy romp, especially if you are a fan of the James Bond franchise because there are loads of homages to the Sean Connery-era.

Never mind the 60's the 90's are dated enough jez! this film brings back so many memories of my teen years and how this film really made an impact on those times, not me...just the time. So apart from bad personal memories what else does this film offer? well actually its pretty good and probably one of the best Bond spoofs/parodies you will see. With a wide range of Bond films spoofed it covers all the regular cliched bases, all the set ups, costumes, plot ideals that you would expect from Bond plus a lot of clever smutty humour. Actually Myers does really well with the whole British comedy thing, he does nail or encapsulate the genre very well, you could almost say its a modern 'Carry On' film. Seeing as this is the first film its not quite as good as the second for me, everything is obviously being set up with characters etc...and the abundance of cameos was slightly worrying at first, kinda assumed it would be a mass celebrity ego trip but surprisingly it all adds to the fun quite nicely. The small cameos by Lowe and Ferrell are good (and fast) but the brief Tom Arnold cameo was probably the best if you like blatant toilet humour. Hard to tell who this is aimed at really as there is much slapstick and childish humour but also some knife edge stuff also, lots of sexually visual gags and naughty names which are very suggestive but admittedly smile inducing. A much more easier character to get on with than 'Wayne Campbell' of 'Wayne's World' and a more universal concept methinks. Every possible stereotype is lanced, all costumes, sets, music, vehicles etc...are correctly presented as this juggernaut of the 60's era steams along with some crazy wild vintage kitsch and a performance from Myers that Carrey would envy.

Great for some yuks and pop culture references! And I know Elizabeth Hurley isn't really the It Girl anymore and she has come across as vapid and culturally unaware in soundbites, but I really think she is the most beautiful woman I've ever seen.