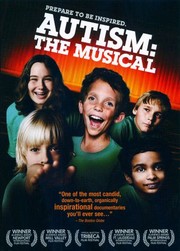 Super Reviewer
John B
April 9, 2015
Troubled but completely adorable kids with autism are compelled to star in a musical by well meaning adults. Happiness is found by both who comply and rebel. Both are unforgettable.

Michael M
November 13, 2014
As a person with Asperger's, I have the same issues with this film that I will have with any film about autism. Some of the issues raised by the parents are flawed, and some of the behaviors are somewhat offensive and even a bit condescending. Still, the good outweighs the bad. It shows that parents struggle with the diagnosis, but also shows how they can eventually accept their child for their own uniqueness. The musical aspect of it may seem exploitative, but its intentions are actually quite honest. Seeing an autistic girl who only parrots others go on stage and sing a full song is quite moving. Some of its information is flawed, but it gets enough things right for me to forgive it. It's spreading knowledge of the condition in an approachable manner, and I respect that a lot.

Mark L
½ June 19, 2013
I only wish there were more scenes interviewing the kids (the one with Wyatt was groundbreaking). As a fellow autistic person, the movie is like the subjects in it: not oridinary, but extra-ordinary.

Joie S
½ February 16, 2013
Very moving portrayal of parenting a child with autism as well as some heart-breaking perspectives of what it's like to be an autistic child. I highly recommend it.

Nathan C
August 21, 2012
A fresh, insightful, and truly inspiring documentary. This just might actually be the cinematic gateway towards opening people's eyes about what autism really is.

This is an actual story of how the Miracle Project is formed and their first project: help autistic kids write, collaborate on, and produce their own musical, in the process of a year. There are many of the associated challenges dealing not only with putting on the show but also with dealing with the children's autism. Five of the children's families are focused on. Sadly, not very much time was devoted to the rest of the children, but at least they're still a contribution.

The documentary has many strengths. First off, the idea to present a more positive side to what is considered devastating is a great premise. In a world where 1 in 150 (now 1 in 88) children are diagnosed with autism, it seems sensible that one be educated to treat autism not as a plague but as a mental difference that, in the end, still makes them human like everyone else and even gives them a gift. The filmmakers' approach to it, bringing in a theater group to start it up, is not only unique but also an awesome way to motivate the premise. The kids are just... wonderful. Wyatt is likeable yet unexpectedly poignant. Henry is expressive. Lexi has an amazing voice. Adam is a strong soul. And I can't help but feel genuine hope for Neal. Through all their associated difficulties, these children -- and their parents -- prevail, which is truly what you want to see. Much interest ensues in how it all gets put together, with humorous and emotional moments.

There are a few weaknesses, which don't make it as much of a powerful documentary as it might have been yet don't diminish the film's effect. Yes, these are children with parents who are there with them every step of the way. But these children's parents are rich and affluent, which is a bit unfair for everyone else. Certainly, not all autistic children come from a wealthy background. Some of the adults tend to be rude and rub off the wrong way. And it doesn't go much deeper into the childrens' lives as it could have, but I'm sure this was because of the time constraints. Might have been more satisfying in that respect as a miniseries.

"Autism: The Musical" is a lovely documentary that's good for raising awareness and even better for warming the hearts of its viewers, especially those affected by autism. Its optimistic display is bound to make you cheer.

Super Reviewer
Lucas M
June 21, 2012
You know that a film is great, when he inspires and move the audience. Fresh.

Tracy D
½ December 25, 2010
What a great program for the kids involved! What a great movie documenting the process and the daily lives of these families affected by autism!

Jennifer S
½ August 29, 2010
I found myself watching this movie as a latest installment in my binge on media about autism. I'm not sure why I'm so fascinated by this neurological condition - perhaps it is the idea that these people aren't necessarily less intelligent than average folk, but rather some kind of alternative to the usual way of perceiving the world. It makes me want to see through their eyes. I intensely wonder what they think of everything. The way that Lexi, as a small child, kept standing and holding her head (probably experiencing sensory overload) reminded me of an old person who has seen too much of the world. I could not help but feel for her.

I also could not help but feel for these parents whose children, by society's definition, have wound up "defective" for seemingly no reason. If I were them I would've felt cheated, for sure. I love to read and write and communicate with people and if a child of mine were severely unable to share that, it would break my heart. It must have been hard for Roseanne Keaton-Walden, who has already struggled and achieved so much with activism issues, to then get a kid who needs ten times more patience and attention than most. I would say the same for Elaine Hall, who went to Russia and and adopted the one kid that would develop autism - but then again, she seems to acknowledge that it was all meant to be... and that there's no denying that she has something special with him.

Wyatt was my favorite kid of the bunch. Where most of them had interrupted communication skills, his was in overdrive - he so eloquently explained his feelings and viewpoint of the world that I was shocked and wondered if he even had autism at all. I suppose that he probably has low test scores or whatever (that scene of the psychologist or whomever saying that he was, essentially, stupid, really pissed me off.... and I can tell that this film was edited to really convey how pointless some of those $200-an-hour "services" can be) but still - I would love to chat with that kid about life. I hope the best for him.

I wasn't sure what to expect with the actual goal of this movie - the musical that would be performed by these autistic kids. They seemed to be all over the place, all the time. I suppose that the climax was touching in it's own way, but I didn't pay attention to the actual play so much as the personal histories of everyone there. What surprised me was when Neal used the alphasmart (?) machine to tell his mother point blank to listen more. I had started to think that he couldn't use words or even knew what they meant, by the way he acted, but apparently he understands more than he lets on. To receive a direct thought from him like that felt like a rare gift.

This movie has won several awards and is a great introduction to the world of autism and movements such as The Miracle Project. It didn't completely send me over the moon so to speak - there is only so much I can take of footage of kids in general - but it did its job well.

Adam H
August 19, 2010
The kids were GREAT, but their parents were insane!
I thought we were going to watch a documentary about a group of kids with autism putting on a musical about autism. Instead we see extremely bad behavior by the children's rich, L.A. parents. Infidelity, an on camera marital separation, an ex-playboy centerfold/psycho-stage-mom, a lawsuit, some bad language - and after all that, we see maybe three minutes of the musical.
There were some interesting stories (and home videos) of the kids as they grew up, and again, the kids were AWESOME!
If the director would have cut out most of the footage of the parents â?? this would have been a great film.

Ethan M
April 21, 2010
Repeatedly brought me to tears... not just trickles, but actual uncontrollable sobbing. I'd watch it alone the first time, just in case. :)

Carye B
February 26, 2010
I really felt like I got to know the 5 autistic kids that were followed in this film...Each one was so different to the next, the movie was really honest of how hard it is, but how magical it is too to raise an autistic kid. I appreciated the parents willingness to be filmed as they went about their daily life -- the good and bad -- lots of suffering marriages, etc. Very good, I highly recommend seeing this film.

Jimena B
January 3, 2010
Different degrees of autism and their effect on the lives of different families.

Shannon M
December 14, 2009
WHAT THE FUCK. Get that crazy theater bitch away from other people's kids. Her priority was clearly: making a musical. And getting praise for being some kind of hero for making a fucking musical, with autistic kids. She even had the nerve to call her thing "The Miracle Project". BECAUSE MAKING A MUSICAL IS A MIRACLE? What a horrible lady. Her son (who has autism and is non-verbal) used a machine to type out "Mom I want to put you on the spot. Be a better listener." NO SERIOUSLY. GODDD. All the kids, and most of the parents (with the creepy exception of the one who said she hoped her kid would die before she did) are great. But that lady.. goddd. WORST EVER. Abhorrent. She had NO concept of how to deal with austism (I know, I'm not like an expert msyelf, and she has a child w/ autism, but she knows how to deal with HER kid, and that's it). Being a theatre NUTBAG (redundant?) doesn't qualify you to work with people. OH man, she sucks.

In other news- facilitated communication is so sketchy sometimes. They ahd one kid who was using a keyboard on a paper to "communicate" w/ his parents but like.. I could SEE that the mom was moving his hand. It was just kind of sad. Anyway. All the kids are adorable and great. But it still pissed me off...

Meghan D
½ November 27, 2009
this movie made me 1) both smile and cry from happiness 2) touch the screen, wishing i could touch the children, and 3) want to work with children with autism.

nathaniel c
November 25, 2009
I myself have two brothers with autism so I was generally interested in this film. Well this is actually a really nice documentary that shows the facts. It also shows the behavior of the people with autism. There isn't much to say but its a nicely filmed documentary that really hits my heart because of my brothers.

At first it quotes statistics.... statistics can be very misleading.

I managed to watch a bit of it..... welll I'd rather be Autistic than american?

But some good messages in there!

Arseniy V
½ October 13, 2009
About as honest, well-captured and moving as such films get. Highly recommended.
Page 1 of 5