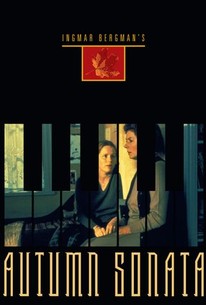 Critics Consensus: A melancholy meditation on the unresolvable tension between parent and child, Autumn Sonata is a fitting swan song for the great Ingrid Bergman.

Critics Consensus: A melancholy meditation on the unresolvable tension between parent and child, Autumn Sonata is a fitting swan song for the great Ingrid Bergman.

Critic Consensus: A melancholy meditation on the unresolvable tension between parent and child, Autumn Sonata is a fitting swan song for the great Ingrid Bergman.

Directed by Ingmar Bergman, this intense domestic drama offers insight into the troubled relationships between a mother and her two daughters, one of whom is dying of a terrible disease that has left her paralyzed and only able to communicate via grunts, and the other who has been estranged from her mother for seven years. It is the sudden arrival of the estranged daughter (Liv Ullmann) that gets the story started. She originally left because she felt that her mother, a famous concert pianist (Ingrid Bergman) ignored her while growing up. Now she brings with her the paralyzed sister who has spent the last few years in an institution. As the story progresses, the threesome try to make peace with each other and in their lives.

Linn Ullmann
as Eva as a child

Bergman restores Ingrid Bergman to her proper place as one of the finest of screen actresses, teaming her with the superb Liv Ullmann in a pairing that simply must not be missed.

The movie makes good chamber music: it's a crafted miniature with Bergman's usual bombast built, for once, into the plot requirements.

Of course Bergman's actresses suffer superbly in microscopic close-up, but the nagging doubt persists as to whether this is incisive psychodrama or just those old nordic blues again.

Autumn Sonata can finally be seen as an austerely beautiful meditation on death and the not-always-realized possibility of reconciliation across generations.

Ingrid Bergman, Ingmar Bergman, and Liv Ullmann show that a mother's apathy can be just as harmful to a child as a verbal assault over a wire hanger (or a beating with one). Perhaps, more so.

Bergman's faith in his characters' capabilities is a calming finish to an otherwise searing portrait.

A small and punishingly honest scrap of interpersonal conflict made out almost entirely of grace notes.

At this point in history the refusal of Bergman to truthfully represent his own story without relying on female emotional expression interferes with his potential exorcism and it prevents me from fully appreciating his art.

Bergman lets the beauty and the pain in his subject's faces tell an unspoken story all their own.

The story that Ingmar Bergman tells us this time does not transcend the purely conventional limits. [Full Review in Spanish]

[Bergman's] self conscious, immensely grave direction suggests some statement about the meaning of life and all that. It is all exquisitely tedious.

Affecting less due to the story, and more due to observing still-radiant Ingrid Bergman in the twilight of her life. Otherwise, there's not much happening in the filmmaking beyond "warm lighting," and the script seems like just a case of Ingmar struggling to find new ways to make characters intensely miserable.

Ingrid is great as a totally self involved woman of great musical talent but no outward vision beyond how it serves her no matter how she tries. The rest of the film is dour and terribly depressing which of course is par for the course with Ingmar Bergman. We are suppose to empathize with Liv Ullman's character but she seems stunted by her bad childhood unable to realize that at some point you have to accept people as they are and get on with the business of living.

This is one of the very best Ingmar Bergman films I have seen, and therefore one of the very best films. Ingrid Bergman and Liv Ullman are simply amazing together as a mother and daughter combination from hell. Ingrid Bergman is terrific, despite a deliberately naff hairdo which makes her look like Queen Elizabeth II of the UK rather than the faded beauty she is. Liv Ullman also has visual nuances to enhance her character - the glasses, platted hair and jumpers enabling this beautiful woman to look frumpy. The acting is simply amazing, even through the subtitles you can tell. Fortunately Scandinavian vocal nuance is similar enough to English to enable us non-Swedish speakers to appreciate the acting. Of course, it has the Ingmar Bergman darkness to it. The sister with the horrible degenerative disease, the drowned toddler, the selfishness of the Ingrid Bergman character. If you get depressed along with the characters in films like this, you might be better off giving this one a miss. But for those with a taste for this type of claustrophobic drama, this is one of the most powerful films you will ever see.

Although the Flixter critic suggests that this is a minor work of Bergman's, I enjoyed it terribly. So many of Ingmar's films work because of the solid effort of Liv Ullmann and this is no exception. For those Ingrid Bergman fans, take note that this is her last film.