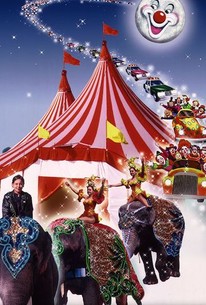 A girl and her best friend hit the road in this family friendly comedy drama -- only the girl's friend weighs in at 4,000 pounds! Eddie (Remy Ryan) is a ten-year-old girl (her name is short for "Edwina") who has trouble communicating with her mother Sarah (Priscilla Barnes) and doesn't care for Sarah's layabout boyfriend, Jeffrey (Patrick Dempsey). A rag-tag circus comes to town, and Eddie finds herself bonding with Ava, the show's performing elephant. Slayton (Timothy Bottoms), the sleazy owner of the circus, learns that he's deep in debt to the IRS, and since Ava is insured for a large sum of money, he plots to kill the elephant in a way that will look like an accident in order to pay off his debts. Eddie, however, gets wind of Slayton's plan; she helps Ava escape, and runs away from home with her new pet at her side. As the hapless local sheriff (Kaye Ballard) and her staff try to find a missing child travelling with a two-ton elephant, Sarah learns that an escapee from prison is on the loose and she becomes afraid that the criminal will cross paths with her missing daughter. As it turns out, Eddie does meet Clayton (Georg Stanford Brown), the jailbird on the lam, but she soon finds that he means her no harm -- and he happens to know a few thing about Slayton and his business. Ava's Magical Adventure marked the directorial debut of actor Patrick Dempsey, who helmed the project in collaboration with Rocky Parker.

There are no critic reviews yet for Ava's Magical Adventure. Keep checking Rotten Tomatoes for updates!

There are no featured reviews for Ava's Magical Adventure at this time.