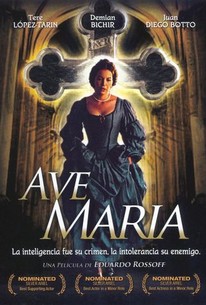 Set in 17th century Mexico, Ave Maria tells the story of Maria Ines (Tere Lopez Tarin), a novice at a Spanish mission whose father is a major figure in the court of Spain. Maria is exceptionally bright and a student of astronomy, botany, and cartography, but her desire to expand her horizons does not make her popular with the friars of the mission, especially Father Serra (Alfredo Sevilla). When Maria's father kills himself, she finds she is no longer a favored novice at the convent, demoted to performing physical labor rather than intellectual exercises. Maria becomes delusional and starts hearing voices as she obsessively cleans the floors of the chapel. Abandoning her inheritance and her last vestiges of privilege, she leaves the mission to work among the poor, where she is said to be able to heal the sick with her faith. The fathers at the convent are outraged, and one, Father Cuna (Damian Alcazar), who has already killed Father Serra to seize control of the mission, makes it clear that Maria is to be stopped at all cost. The directorial debut from Eduardo Rossoff, Ave Maria was shown at the 1999 Guadalajara Film Festival.

There are no featured reviews for Ave Maria at this time.