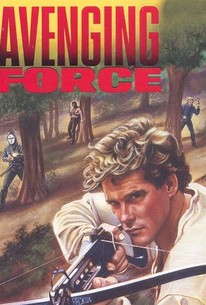 Produced in the Autumn of the Golan-Globus collaboration, Avenging Force serves as a vehicle for American Ninja costar Michael Dudikoff. Cast as a retired secret service agent, Dudikoff runs up against a sinister right-wing political organization called the Pentangle. He comes to the aid of his best friend Steve James, a black political candidate who has become a target for the Pentangle's henchmen. Impressed by Dudikoff's martial arts skills, the Pentangle leaders try to convince him to join their cause-and to ensure his cooperation, they kidnap his little sister Alison Gereighty. Avenging Force concludes with a violent Enter the Dragon-style mano y mano squareoff between Dudikoff and the Pentangle flunkeys. The film's finale is "open" enough to allow for a sequel, which has yet to appear. ~ Hal Erickson, Rovi

John A. Barber
as Butler

What follows is kung fu, liberal fu and family man fu, all orchestrated by director Sam (Doctor Ninja) Firstenberg with his usual panache.

Better than expected action film, mostly due to the quality of the villains.

A better-than-average action-adventure and buddies flick with Michael Dudikoff and Steve James since American Ninja. The acting is admittedly dry, but the action is top-notch, with plenty of opportunity to cheer for the hero.