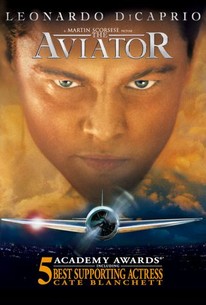 Critics Consensus: With a rich sense of period detail, The Aviator succeeds thanks to typically assured direction from Martin Scorsese and a strong performance from Leonardo DiCaprio, who charts Howard Hughes' descent from eccentric billionaire to reclusive madman.

Critics Consensus: With a rich sense of period detail, The Aviator succeeds thanks to typically assured direction from Martin Scorsese and a strong performance from Leonardo DiCaprio, who charts Howard Hughes' descent from eccentric billionaire to reclusive madman.

Critic Consensus: With a rich sense of period detail, The Aviator succeeds thanks to typically assured direction from Martin Scorsese and a strong performance from Leonardo DiCaprio, who charts Howard Hughes' descent from eccentric billionaire to reclusive madman.

Martin Scorsese directed this fast-moving, epic-scale biopic documenting the life and loves one of the most colorful Americans of the 20th century, Howard Hughes. The Aviator follows Hughes (played by Leonardo DiCaprio) as the twentysomething millionaire, having already made a fortune improving the design of oil-drilling bits, comes to Hollywood with an interest in getting into the picture business. It doesn't take long for Hughes, with his passion for airplanes, to jump from producer to director of his first major film project, a World War I air epic called Hell's Angels, which took three years to complete thanks to the shift from silent to sound filming and Hughes' relentless perfectionism. However, the film was a massive hit, and the eccentric inventor became a mogul in Hollywood, making Jean Harlow (Gwen Stefani) a star and enjoying a romance with Katharine Hepburn (Cate Blanchett). But Hollywood's old-boy network never fully accepted Hughes, and in time his passion for flying began to reclaim his attentions as he began designing new planes, setting air speed records, flying around the world, and risking his life testing aircraft. Hughes also found time to romance Ava Gardner (Kate Beckinsale) and founded his own airline, Trans-World Airlines, though as his ideas became bolder, his approach became more eccentric, and he gained many powerful enemies, including the head of Pan-American Airlines, Juan Trippe (Alec Baldwin), and Senator Ralph Owen Brewster (Alan Alda), who attempted to prove that Hughes' radical design ideas were actually part of an effort to bilk taxpayers for millions of dollars through government contracts. The Aviator's star-studded cast also includes John C. Reilly, Jude Law, Willem Dafoe, Ian Holm, and Frances Conroy. ~ Mark Deming, Rovi

Stanley DeSantis
as Louis B. Mayer

Critic Reviews for The Aviator

The Aviator does make for a rather fascinating and compelling stand-alone story about an industrious, fastidious, obsessive man...

Good but not great, and not for younger kids.

This handsome movie is an oddly well-behaved one to come from the preternaturally energetic Scorsese.

This almost-great epic has one foot in legend: it's a vision of an American titan that could have sprung from the insides of Hughes's own obsessive, perfectionist head.

Despite a pacy, technically brilliant but otherwise slightly ordinary first half-hour or so, Scorsese's Howard Hughes movie is his best since The Age of Innocence.

Scorsese gives us a lot more than the Charles Foster Kane of the clouds. He keeps focus on Hughes, the dreamer, who continually reached out, grabbed the future and pulled it toward him.

The Aviator soars high because of both Martin Scorsese and Leonardo DiCaprio.

Bringing Hughes' life to the big screen was a task for giants. The film doesn't feel like an Scorsese movie, it has an audacious editing, homaging the Hollywood era it takes place on. DiCaprio and Blanchett are simply spectacular. [Full review in Spanish]

What prominent individual's life could not be made to shine or at least improved markedly if all the unpleasant portions were subtracted?

At the epicentre of this movie maelstrom is an assured and adroit performance by Leonardo DiCaprio.

What constitutes risk in acting? What Blanchett does here as Hepburn, daring to take on an icon in the same medium for which she was known and celebrated.

The Aviator is a flawed but incredibly passionate and entertaining film befitting a character as flamboyant as Hughes.

Audience Reviews for The Aviator

Scorsese and DiCaprio make a formidable duo in this intricate biopic. The Aviator puts together Scorsese's masterful and colorful direction along with DiCaprio's career-defining performance to make for a classical film. 4/5

It's quite a good performance by DiCaprio but overall the film is not that compelling and, unfortunately, is too long.

An interesting biopic well-acted by DiCaprio. Nothing very bold about the film but it is well shot.

Leonardo DiCaprio is stunning in the role of Howard Hughes, a millionaire film director at heart, but his soul is within his aviation career, building planes for the war. This film may not be perfect, but the writing and direction is. The flaws are in the plot and order of events. With questionable dialogue and cheap CG effects, "The Aviator" might as well be a fictional story, but the backstory of this legendary director/aviator is far too compelling to look away from. I cannot say that I love this film, but I absolutely loved the camerawork and the performances. "The Aviator" is but a fantastic film to add to the Scorsese shelf, but fails to provide any spectacular moments to remember in the future. I highly enjoyed this film for what it was!