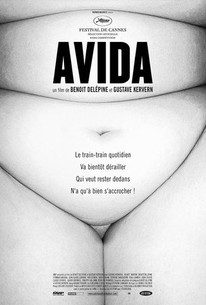 In this bizarre surrealist comedy from France, a handful of oddball characters live in world where people heap strange forms of abuse on animals -- dwarves stage bullfights with rhinos, zoos open restaurants where the privileged can dine on the animals on display, and the wealthy lock themselves into their mansion with the angry pit bulls trained to protect them. In the midst of such madness, a stocky animal handler (Gustave Kervern) who can neither hear nor speak falls in with a pair of dissolute zookeepers (Benoit Delepine and Eric Martin) who are hooked on ketamine and shoot one another with tranquilizer darts for fun. The zookeepers involve their new friend in a crazy scheme to kidnap the pet dog of a very wealthy and extremely large woman, Avida (Velvet), but the three men prove to be wildly inept criminals, and once they're found out, Avida forces them to help her in a plan to take her own life. Featuring a cameo appearance from acclaimed filmmaker Claude Lelouch, Avida was written and directed by Benoit Delepine and Gustave Kervern, who also act in the film; it received its American premiere at the 2007 Tribeca Film Festival. ~ Mark Deming, Rovi

The Velvet Underground
as Avida

Much brainier than a John Waters opus, Avida eructs with deadpan hilarity through a series of nonsequential comic set pieces.

Somewhere between Monty Python, Jacques Tati and a slideshow of New Yorker cartoons, this critique of life's cruel inconsistency confirms the French co-directors' gift for reinterpreting surrealism in a humorously modern key.

There are no featured audience reviews yet. Click the link below to see what others say about Avida!