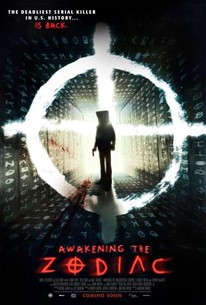 In 1968, one of the deadliest serial killers in U.S. history disappeared without a trace. His identity and cryptic messages remained unsolved for decades...until now. After a fortune seeking couple uncover a forty-year-old film reel depicting two gruesome murders taken by the killer himself, they set out to solve the mystery and claim the $100,000 reward. But the situation quickly changes, as the hunters become the hunted.

Renato Vettore
as Custodian
View All

Critic Reviews for Awakening the Zodiac

Its pedestrian execution and the general sense that you're watching a facsimile of something so much better is overwhelming - meaning it's beyond underwhelming.

True-crime obsessives may be disappointed that most of this film is fiction; but fans of grubby B-pictures should appreciate how assured the movie is.

Scant action arrives until the last half hour, and then it's frequently preposterous; with minor fine-tuning, some climactic peril here might easily play as slapstick.

Awakening the Zodiac might be interesting to check out as late-night TV fare, but the overall film will make you want to seek out other representations of the Zodiac Killer...

While admittedly atmospheric and stylishly made, the picture does have some problems generating the kind of chills it clearly wants to elicit.

Increased stupidity at the end aside, it's more often than not a tight and effective little thriller offering a strong script, solid performances, and some creepy beats.

This is a solid concept for a story ... but that's just the starting point of a movie.

Wright builds lots of suspense in the early scenes, but the dark and muddy cinematography makes it hard to see what's going on. And the climax just isn't very exciting. But the actors, especially Craven, commit to the silly script.

If you go into it hoping for a Zodiac classic, you're ultimately going to be disappointed, but if you go into it prepared for a polished little thriller with dark overtones and just a little too much ambition, you'll find it an enjoyable ride.

Awakening the Zodiac has a slapdash feel that strains to fill the big screen.

A young couple comes across evidence that might finally unmask the notorious 1960s serial murderer in this disappointing thriller.

A feature with a few promising ideas and scrappy B-movie performances, finding a fresh way to explore old murder business.

Audience Reviews for Awakening the Zodiac

Despite both lead characters being completely unlikable, Awakening the Zodiac is actually better than I was expecting. Certainly less horror, more investigative thriller, is a serviceable theoretical followup to the real-life Zodiac killings. Could probably have used a little more excitement or a lot more logical action though.