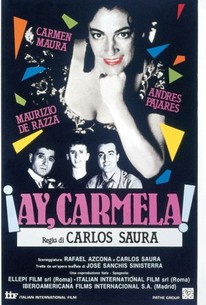 In Ay, Carmela, filmmaker Carlos Saura again harks back to his bitter childhood memories of the Spanish Civil War. Carmela (Carmen Maura), Paulino (Andres Pajares) and Gustavete (Gabino Diego) are travelling entertainers, trouping through Spain to perform their act before the Republican troops. Early one morning, the three artistes find themselves in Franco-controlled territory. In mute terror, the captive entertainers witness the deaths of several innocents at the hands of the fascists. Then they are forced to do a show for their captors. Swallowing their pride and hiding their disgust, the entertainers agree to do so. But Carmela is unable to go through with this humiliation: before an assembly a Francoites, she defiantly sings a paean to the Loyalist cause...and in so doing, achieves martyrdom.

Miguel A. Rellan
as Interrogating Lieutenant

Not Maura's best, but OK

There are no featured reviews for Ay, Carmela! at this time.