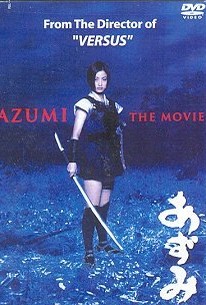 Critics Consensus: This adaptation of the popular manga series offers exquisitely choreographed violence -- and little else.

Critics Consensus: This adaptation of the popular manga series offers exquisitely choreographed violence -- and little else.

Critic Consensus: This adaptation of the popular manga series offers exquisitely choreographed violence -- and little else.

Orphaned in 19th-century war-torn Tokugawa Shogun period of Japan, Azumi is found and raised along with nine other orphans by Ji, the mentor. The Shogun, sickened by innocent lives lost in senseless warfare, had commissioned Ji to cultivate assassins that could eliminate warlords before they could strike. After 10 years of inconceivably harsh training and discipline, Azumi and her comrades, who have been molded into invincible warriors, excitedly await instructions from Ji. "An assassin has no choice but to fulfill his mission, however cruel or extreme," says their mentor. "This is your ultimate test. You must kill your partner, or be killed." Azumi is stupefied. She and her partner, Nachi, who have developed a special relationship, have no choice but accept their terrible fate--only one of them can survive. With heavy hearts, Azumi, along with the four other survivors of the "test," Ukiha, Hyuga, Amagi and Nagara, venture into the vast world outside of their secluded valley.

The tone is bleak and the comic-book violence relentless, but the wirework and Yuta Morokaji's stunt choreography are impressive.

Ryuhei Kitamura is 37, but he makes films like a 15-year-old fanboy. That is, he has no sense of story, his visual style is basically point-and-shoot, the boys are cool and rebellious and the girls are cute.

An uneven effort overall that when it is working has a strange, engaging energy that is often overturned by an uncertain staidness.

Though it contains some superbly staged and highly lavish action sequences...[the film] lacks the tautness of its heroine.

Overdone and overlong, but its lunatic flavor -- check out Joe Odagiri's Tiny Tim as ninja sadist -- saves the day.

Well, this particular fantasy surely lost its novelty value a while back, and frankly never did much for me anyhow.

What will slay you first--the often histrionic acting or the drag-out boredom of that hulking, two-hour-plus thing in the distance that faintly resembles a plot?

The raw visceral pleasures are enough to carry the film past some clunky melodrama that bloats the film to a two-hour-plus run time.

Nothing can lift the glaze from your eyes through the endlessly recurring hokey fight scenes of the movie's interminable 128-minute running time.

Based on a popular manga series centring around a young girl who is raised by assassins and eventually set on a mission to kill off some warlords who threaten the peace of Japan. More samurai than you can shake a stick at hehe yes we've seen this kind of thing before but for some reason that doesn't matter. There is nothing better than seeing a well made Japanese film about their past, yes this has a lot of artistic license and is more fantasy based but its still damn fun. A curious set of characters all led by their strict master and all played well by the cast, Aya Ueto as 'Azumi' is ultra cute, not the most authentic looking samurai but this is manga adaptation. The rest of the cast are unknown to me but do the job well, nothing too special or original but its entertaining. The deadly character of 'Bijomaru Mogami' is fun, an egotistical lethal merc who kills pretty much anyone for fun and is dressed all in flowing white, think along the lines of 'Vega' from the Street Fighter II videogame franchise. Action is fast fluid and bloody when it kicks in as you might expect but its not over done. There is the odd moment of high flying wire work which spoils it in my view, they love that in Japan for some reason. The plot is simple and easily followed, the film looks great in terms of costumes, weapons and location and it comes across perfectly as an adaptation.

A samurai sick of war takes in a group of orphans and trains them to be assassins with the sole purpose in life of killing the warlords responsible for the constant bloodshed. Based on a comic book and directed in a very anime style, this film has more in common with a superhero movie than a samurai epic and contains the associated melodrama and lack of moral ambiguity; it's all about the good guys kicking bad guy ass. And very stylishly they do it too. Ryuhei Kitamura stamps his usual slick visuals onto the action and although he cannot resist overcooking them from time to time, the set pieces are very well staged. The fight sequences get ever more impressive as they go, the highlight for me being the scene in which we finally get to see Azumi's master in action. Hardly the height of depth and sophistication, but it's an action-packed comic strip hack and slasher that is perfectly paced for it's highly entertaining two hour length.

"No matter how much I try to escape...I can't avoid it. I have no choice...I am forced to kill." Azumi is a pretty standard Asian action flick with a little drama mixed in. It's a better watch than most, though, because of several pretty emotional twists and turns that the story takes. You come to care about several of the main characters, and the things that happen to them are handled in a way that makes them have an impact, without killing the momentum of what's an action movie at its heart. I can't comment on how carefully the plot sticks to that of the manga, as I haven't read it. Azumi is an orphaned girl raised with 9 other orphans by a master swordsman. He plans to one day unleash them as assassins to kill the various warlords that are responsible for the devastating, re-occurring wars throughout Japan. As the designated day for the plan grows closer, Azumi and her companions face one final, brutal test, and then go out into a world that is far more complicated than the secluded environment they were raised in. The fanciful and stylized fight choreography isn't the best that I've seen, but it more than suffices. There are times that the warriors standing around in the battle scenes waiting their "turn" are hard to ignore, but that's a pretty minor complaint. There are some pretty cool and memorable moments, as well. The battles are frequent and entertaining, and the levels of bloody carnage are noticeable, without being overly gratuitous. There isn't any definite thing I can point to as the main reason why I liked Azumi so much. It's true that it's another of countless similar sword-fighting movies set in ancient Japan, but it's well-made and enjoyable. If you'd like a satisfying action flick with a very pretty girl as the lead and a few genuinely sad moments, this is a good movie to try.

Azumi. Ryuhei Kitamura is in the director's chair. The beautiful Aya Ueto is a samurai assassin. So this should be one fantastic movie right? For the most part, yes.

There is enough going on in the story to fill the entire 2 hour 15 minute run time, although there is room to shorten this picture as it does drag a little. The final 10 minutes are also a bit of a mess. There are bits and pieces of wacky humor and characters to take away from the realism, especially with the villains, but overall there is still a serious tone to the film.

There is an abundant amount of action and while most of it is run of the mill samurai swordplay, there is some style to it, along with buckets of blood. The choreography is enjoyable and Kitamura throws in some of his distinctive camera work and effects.

Aya Ueto successfully pulls off a samurai assassin. This is a huge plus. Jo Odagiri is also something as the Bijomaru character.

As a whole, Azumi does amuse. Take it for what it is worth and enjoy.