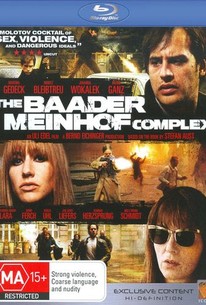 Director Uli Edel teams with screenwriter Bernd Eichinger to explore a dark period in German history with this drama detailing the rise and fall of the Red Army Faction, a left-wing terrorist organization that became increasingly active following World War II. Also known as the Baader-Meinhof Group, the Red Army Faction was formed by the radicalized children of the Nazi generation with the intended goal of battling Western imperialism and the West German establishment. Adapted from author Stefan Aust's definitive account of the group that resorted to killing innocent civilians in the name of democracy and justice, The Baader Meinhof Complex stars Moritz Bleibtreu as Andreas Baader and Martina Gedeck as Ulrike Meinhof. Bruno Ganz co-stars as Horst Herold, the head of the German police force faced with the task of bringing the Red Army Faction to justice.

It is brutal, relentless, nihilistic, violent, terrifying, relentless, psychopathic, and yet it is so powerful, so explosively febrile, it compels you to watch and keep watching.

Two problems I had with the film were that the subtitles were too small making them difficult to read and that they did not remain on the screen long enough to adequately read. Nevertheless, it is an amazing movie and well worth your time.

It doggedly refuses easy ways out, and it has the guts, brains and critical eye to plumb the roots of terror and its bloody consequences.

The Baader-Meinhof Complex is not an easy film to watch; its violence is ugly and brutish. And there's a lot of it.

It'd be nice to see an American filmmaker commit a similar reckoning with the Watts riots, the Weather Underground, or the Black Power movement, not simply resort to cant and kitsch but to really interpret those moments.

Director Uli Edel and producer and screenwriter Bernd Eichinger don't take sides. They don't condemn, but nor do they excuse. Instead, they leave us to make up our own minds.

Taut and ferocious, a lean, solid, unsentimental narrative that dives right into the nitty gritty details of its subject.

It's almost tempting to discuss The Baader Meinhof Complex as if it was a documentary. Mr. Edel has very carefully recreated a distantly removed time and actions hard to sympathize with and in doing so has created a riveting and remarkable film.

In the end, however expansive, action-packed and powerfully shot The Baader-Meinhof Complex undoubtedly is, it remains a disturbing hybrid that leaves the viewer jaded, bizarrely perplex and ultimately unsatisfied.

The leaders of a terrorist group working within Germany in the 1970s are hunted down and imprisoned while their comrades perpetrate increasingly desperate plans for their release. The Baader Meinhof Complex is an interesting look at a period of German history I new little about, when the new generation feared the apathy that led to Hitler's rise and decided to act against what they saw as similarly imperialist actions. This gives an interesting political backdrop to some well executed action sequences during the first half of the film but unfortunately once they are captured, the film becomes quite unfocussed and slightly tiresome. It degenerates into various scenes of prison cell squabbling which is in no way aided by the fact that there is no central character the viewer can identify with (or hate for that matter) and so it all becomes a little difficult to care about any of these "idealists" who actually come across as arrogant, obnoxious and hypocritical. It does have its good points and is certainly an interesting backdrop to the political situation of the 1970s, but as a story of individuals it fails to engage on any real level.

The true story of terror attacks in Germany of the 1960s and 70s, performed by left extremists of the Red Army Fraction. While the movie is already two and a half hours long, it would have needed even another hour to deliver the background for people not familiar with this part of Germany's history. Especially the end comes rather suddenly and should have some explanations added for foreign audiences. That being said, the film does a great job in bringing this time back to life by rushing through the most important events in a really exciting and interesting way, following the most important characters on both sides of the law. The cast reads like a who is who of current German cinema, the performances are all around great, especially by Moritz Bleibtreu as terrorist leader Andreas Baader. By using montages with original news footage and music, delivering some of the strongest scenes, the film manages to sum up the mood, thread, ideas and emotions involved at that time really well. It just shows what happened, without judging or taking either the terrorists' or the law's side. A great history lesson, but probably hard to consume without some more background information.

The ideals and the commitments made by those involved in the actual story are truly intriguing, However, I'm not well versed enough on Germany's post-war history to be much of an authority. With that said, The Baader Meinhof Complex, unfortunately, comes across as a tangled mess, at least plot wise. Instead of bringing forth worldwide revolution, the Baader Meinhoff Complex became hunted criminals. Eventually, the group was rounded up and put on trial. While incarcerated, the urban legends and conspiracy theories about the Baader Meinhoff Complex grow from within prison walls.

WOW!!! A very powerful, intense, eerie, shocking film. There is no positive outcome with terrorism. Idealism, objectives, and goals are muddled by the means. Yet, there is no doubt that there are societal wrongs that require correction and reigning powers are sometimes part of or benefit from the problem. I know nothing about this era of German history or the veracity of this presentation, but seeing this film triggers the desire to learn more about the context.