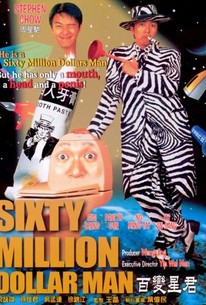 Superstar comedian Stephen Chiau stars in this wild and woolly yarn about a hapless young college student named Lee Chak-lee who gets blown up by a dastardly yakuza operative after dating the gangster's girlfriend. All that remains of the lad is his brain and his lips. Yet thanks to the mad creations of Professor Chang Sze (Elvis Tsui Kam-kong), Lee lives again in a body fashioned out of cheap consumer electronics and powered with a handful of D batteries. Lee soon discovers that he can turn his limbs or indeed his entire body into a dizzying sundry of household objects such as a spatula, toothpaste tube, and a microwave. These unlikely skills come in handy when he is assigned to teach biology in front of Hong Kong's worst high-schoolers. Along the way, the yakuza who tried to blow him up learns that he didn't quite finish the job and sets out to set things right.