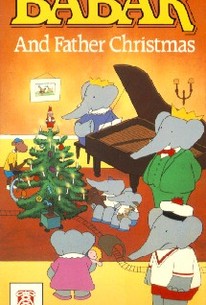 Based on the final "Babar" book by Jean de Brunhoff, this animated special was also the first cartoon rendition of Babar and his friends since 1968. At the invitation of King Babar, the benevolent elephant regent of Celesteville, Father Christmas (aka Santa Claus) heads down from his headquarters "North of Boromir" for the purpose of spreading some Yuletide spirit during the summer months. Unfortunately, the pesky Retaxes the Rhinoceros, convinced that he won't be getting any Christmas presents, intends to sabotage the Jolly Old Elf's visit. The dilemma is solved in a most gentle, nonviolent fashion, in the tradition of the original "Babar" short stories. Adapted for television by the author's son Jean de Brunhoff, Babar & Father Christmas made its American debut on December 5, 1986, courtesy of the HBO cable service.

There are no critic reviews yet for Babar and Father Christmas. Keep checking Rotten Tomatoes for updates!

There are no featured reviews for Babar and Father Christmas at this time.