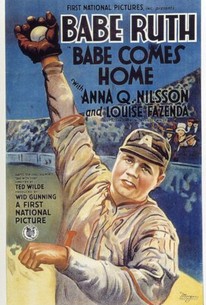 Baseball great George Herman "Babe" Ruth's second starring film (the first was 1920's Headin' Home) was the amiable romantic comedy The Babe Comes Home. Babe Ruth plays Babe Dugan, home run whiz of the Los Angeles Angels (a minor-league team in 1927). Babe's habit of chewing tobacco makes him the bane of the Snow White Laundry, which has to clean his juice-stained uniforms after every game. Laundress Vernie (Anna Q. Nilsson) attends an Angels game to see for herself just how one man can be so messy. Babe hits a fly ball, which hits Vernie in the eye. From this bad start, a romance develops, culminating in an engagement. On the eve of the wedding, Babe and Vernie have a rhubarb over his tobacco habit. She walks out, and Babe goes into a slump. But during a crucial game (bases loaded in the ninth, natch!) Vernie shows up in the stands and tosses Babe a flesh plug of tobacco. He stuffs the wad in his mouth and hits the deciding homer. Conceding that it was Vernie's love and not the "chew" that inspired him to win, Babe swears off tobacco forever. The ball-playing scenes in The Babe Comes Home were filmed at Los Angeles' Wrigley Field, which would become a popular location site for future Hollywood baseball flicks. Based on a magazine story by Wid Gunning, The Babe Comes Home was a success with both movie and baseball fans alike (never mind such inaccuracies as showing the catchers wearing their wedding rings), but it's likely that it had no bigger fan than Babe Ruth himself, who later confessed to having sat through the 6-reeler ten times. ~ Hal Erickson, Rovi

Mr. Ruth, making his screen debut, appeared at ease and pleasantly unconscious of the camera.

The plot is all about baseball, with, of course, a timely home run in the end, but it's all tied together with a gay romance and promises to show audience-holding strength.

As a film star, Babe (George Herman) Ruth, delivers almost as handily as on the diamond, which is saying much both ways for the King of Swat.

Ruth, variously known as the Home Run King, the Biffing Bambino, the Sultan of Swat, the Mogul of Mayhem, etc., does poorly in a film recounting the life story of a baseball player. Mr. Ruth is not even qualified to hold a cinema actor's lipstick.

Like "Red" Grange, this other athletic marvel is surprisingly good as an actor. Perhaps the control of muscle and nerve they have learned in sport makes them unusually responsive in obeying film direction.

[Babe Ruth's] good humored, never-quite-grown-up personality radiates out of Babe Comes Home. The lad is a screen bet, and no mistake. And he can act.

Babe isn't a comedian but he has been surrounded with a good cast and provided with enough good opportunities to permit him to get by with it very nicely.

There are no featured reviews for Babe Comes Home at this time.