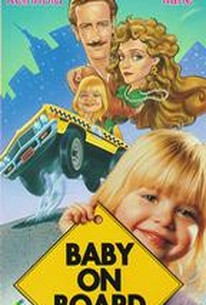 Carol Kane plays the wife of a murdered Mafia bookkeeper in Baby on Board. With her baby in tow, Kane tracks the hitman to the airport, intending to shoot the man. A pickpocket causes the gun to discharge prematurely, and now it's Kane who is being pursued. She commandeers a cab driven by Judge Reinhold, and the chase is on. As light as a feather, Baby on Board gets plenty of laughs from the basic situation as well as the fevered rapport between Kane and Reinhold.

A. Frank Ruffo
as Goon
View All

Critic Reviews for Baby on Board

There are no critic reviews yet for Baby on Board. Keep checking Rotten Tomatoes for updates!

Audience Reviews for Baby on Board

Baby on Board, have a stupid plot and look silly, but could be a good entertainment. In the end, we learn one thing: never exclude your first thought.

Baby on Board Quotes