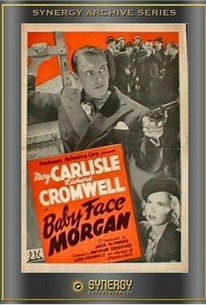 This homey little comedy is predicated on the notion that bucolic country boy Morgan (Richard Cromwell) is the son of a notorious Roaring-Twenties racketeer. Morgan Senior's former gang, pining for their glory days, appoint "Baby Face" Morgan as their leader and resume their criminal activities. Their strategy is sublime: with the FBI busily beating the bushes for Nazi spies, who's going to pay attention to a bunch of middle-aged Prohibition gangsters? Unaware that he's being used as a figurehead, Morgan gets mixed up in a crooked insurance scheme, but by film's end he's figured out a way to clear himself and the mob, with everyone learning a lesson in the process. Reviewers in 1942 were amused by Baby Face Morgan but deplored its threadbare production values, noting that at one point the klieg lights could be seen reflecting on the bald dome of supporting player Vince Barnett!

Pierce Lyden
as Gap
View All

There are no critic reviews yet for Baby Face Morgan. Keep checking Rotten Tomatoes for updates!

There are no featured reviews for Baby Face Morgan at this time.