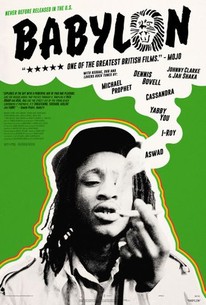 Franco Rosso's incendiary Babylon had its world premiere at Cannes in 1980 but went unreleased in the U.S. for "being too controversial, and likely to incite racial tension" (Vivien Goldman, Time Out). Raw and smoldering, it follows a young dancehall DJ (Brinsley Forde, frontman of landmark British reggae group Aswad) in South London as he pursues his musical ambitions, battling fiercely against the racism and xenophobia of employers, neighbors, police, and the National Front.

Maggie Steed
as Woman At Lockup

Bill Moody
as Man On Balcony

It's a really vivid life at a certain part of life.

A new restoration of this 1980 British cult classic makes plain that its themes of disaffection and racial discord in south London are still relevant nearly four decades later.

Babylon's cultural specificity is what gives it power, putting it as much in a tradition of British alienated youth movies.

Assertive and ebullient, "Babylon" is as alive as a movie can be to the everyday mesh of liberating art, humorous camaraderie and hazardous political reality.

The movie is more interested in what feels real than what seems right.

A film which treasures authenticity in its search for emotional body blows.

Franco Rosso's film Babylon is a hidden gem when it comes to authentic explorations of institutional racism and the immigrant experience.

The central M.C. is played by Brinsley Forde, leader of the British reggae band, Aswad; his musical presence is just one element of authenticity in a movie that never strikes a false note.

With its vivid cinematography, incredible soundtrack, and powerful message... It has become an icon of its time and a cinematic classic, influencing generations of artists.

The film is also visually rich. Every minute is filled with the details of a period and milieu that's rarely so crisp on film.

Rosso's rough-and-tumble portrait of immigrant life in the slums of Thatcher's England arrives in American theaters 39 years late and depressingly right on time.

If The Harder They Come was made in Brixton in Thatcher's early years (1980) with Brinsley Forde from Aswad & Double Deckers, then it might look something like this. Excellent film.