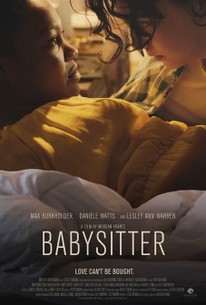 A dysfunctional L.A. family hires a mysterious babysitter who changes their lives. Ray Longway, a moody teenager, is a pawn in his parents' bitter divorce. His mother, a struggling actress who married rich, has grown accustomed to their cushy L.A. lifestyle but now, this lifestyle is threatened and depends solely on Ray's custody decision. The family hires a Wiccan-practicing babysitter, Anjelika, who quickly fills the voids in everyones lives. After sharing a joint one night, Ray and Anjelika form a deep bond that unfolds into something strange and profound -- but their entanglement is poised to jeopardize Ray's mother's master plan. Babysitter features breakout performances by Max Burkholder (Ray), Daniele Watts (Anjelika) and is Morgan Krantz' feature directorial debut.

There are no critic reviews yet for Babysitter. Keep checking Rotten Tomatoes for updates!

There are no featured reviews for Babysitter at this time.