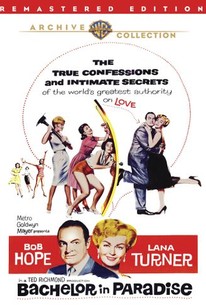 Bob Hope was in the first stages of his cinematic decline when he starred in Bachelor in Paradise. Hope plays a "romance expert" who is contracted to write an expose on the sexual habits of suburban California housewives. For research purposes, he moves into a subdivision called Paradise, populated exclusively by good-looking young newlyweds. Much to the dismay of the men in the community, all of the gorgeous young wives gravitate to Hope-especially Paula Prentiss, the sexy bride of nonplussed Jim Hutton. Fortunately for all concerned, Hope is "claimed" by the only other single resident of Paradise, the glamorous Lana Turner. Frequent Bob Hope collaborator Hal Kanter cowrote the screenplay of Bachelor of Paradise with Valentine Davies; the script was based on a story by Vera Caspary, who in better days wrote Laura. Henry Mancini and Mack Davis' Oscar-nominated title song is the only true distinction of this lesser Hope farce. He seems to be sleepwalking while the rest of the cast is trying way too hard. ~ Hal Erickson, Rovi

Critic Reviews for Bachelor in Paradise

The ensuing merriment slows down to a stop before the film is over, although Hope utters dozens of snappy wisecracks in his copyrighted fashion...

A disappointing, unfunny Bob Hope farce that he could have done in his sleep.

The mild comedy is predictable and trite, in other words it's a typical Bob Hope vehicle.

Audience Reviews for Bachelor in Paradise

There are no featured audience reviews yet. Click the link below to see what others say about Bachelor in Paradise!