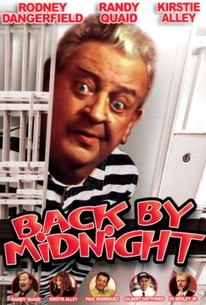 Back by Midnight Photos

In this comedy, Jake (Rodney Dangerfield) is the warden of Rockwood Prison, a private minimal security correctional facility which has fallen into disrepair. Jake has appealed to Eli (Randy Quaid), the owner of Rockwood, to give him enogh money to get the place back up to code, but Eli doesn't want invest any more in the facility -- and tells Jake he has only two months left on his contract. Short on options, Jake gets the idea of turning Rockwood into a country club and sets out to make the place look spiffy by stealing furniture and supplies from Eli's estate. Back By Midnight features a number of noted comics and actors in supporting roles, including Paul Rodriguez, Kirstie Alley, Louis Anderson, Gilbert Gottfried, Tony Cox, Ed Begley Jr., Yeardley Smith, and Ron Jeremy.

Paul Rodriguez
as Next Week

Phil LaMarr
as Mile Away

Critic Reviews for Back by Midnight

There are no critic reviews yet for Back by Midnight. Keep checking Rotten Tomatoes for updates!

Audience Reviews for Back by Midnight

There are no featured audience reviews yet. Click the link below to see what others say about Back by Midnight!

Back by Midnight Quotes