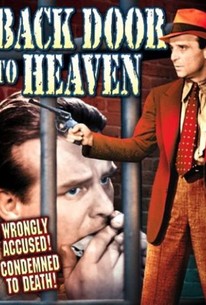 Back Door to Heaven Photos

Back Door to Heaven produced, written and directed by William Howard, while considered a hard-hitting social drama in its day, now seems a sentimental, mawkish tearjerker. Frankie (Wallace Ford) is a drifter, raised in reform school who, along with his friend Jud (Stu Erwin) get involved in a robbery and murder. Frankie breaks out of prison in time to attend his grammar school reunion held by his former teacher Miss Williams (Aline MacMahon). There he makes his final statement and is killed in a blaze of bullets. Wallace Ford gives a mawkish, cliched performance as Frankie and the plot has my glaring leaps of logic. What may once have been social realism now seems like sentimental melodrama.

James Lydon
as Frankie as a Boy

Jimmy Lydon
as Frankie as a Boy

Bert Frohman
as The Mouse

Critic Reviews for Back Door to Heaven

It is hard to believe that an attractive chorus girl would remain in love with a boy whom she last saw when they were both at the primary school 15 years earlier, yet this is what happens.

There are no featured reviews for Back Door to Heaven at this time.

Back Door to Heaven Quotes