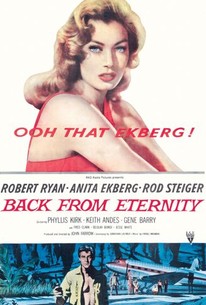 Back From Eternity Photos

Director John Farrow's Back From Eternity is a virtual scene-for-scene remake of Farrow's 1939 film Five Came Back. The earlier film is the better of the two, if only because it is 22 minutes shorter. The plot concerns a small passenger plane that crashlands in South America, square in the heart of headhunter country. Pilot Robert Ryan is able to get the plane back into flying condition; unfortunately he discovers that the plane will only be able to carry five of its eleven passengers to safety. Who will have to be left behind: condemned murderer Rod Steiger, socialite Phyllis Kirk, her weak-willed fiance Gene Barry, copilot Keith Andes, elderly married couple Beulah Bondi and Cameron Prud'homme, songstress Anita Ekberg, foul-tempered cop Fred Clark, soft-hearted crook Jesse White, or tousle-haired kid Jon Provost? Rod Steiger is just fine in the role orginally played by Joseph Calleia, but Ekberg is no match for the original's Lucille Ball.

Critic Reviews for Back From Eternity

... John Farrow's 1956 aviation disaster thriller turned jungle survival drama is in fact a faithful remake of the director's own 1939 Five Came Back.

Why this film was made was to see if it could save failing RKO additional expenses and make money the easy way through a remake.

Audience Reviews for Back From Eternity

Solid remake of Five Came Back. Although not quite as good as the original this almost scene for scene redo is well acted by all. Top lined Robert Ryan is surprisingly not handed the flashiest role which goes to Rod Steiger but its nice to see him in good guy mode for a change.

An unheralded retooling of Five Came Back that's well worth a look.

Back From Eternity Quotes