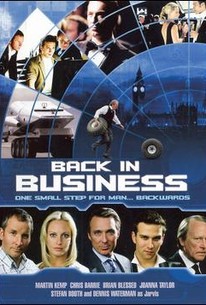 Back in Business Photos

U.K. director Chris Munro's wicked satirical comedy Back in Business dissects and excoriates the slimy underbelly of British capitalism with a look at several high-rolling English con artists and the brouhaha surrounding their latest national scam. Joanna Taylor (Post Impact) and screen legend Brian Blessed (I Claudius) play, respectively, press officer Fiona Arlington Spencer and press chief Trevor Pilkington. As the byzantine story opens, the duo leaks to the public news of Britain's latest contribution to the space race: 'The Explorer,' an interstellar vehicle allegedly capable of mining an energy-rich substance on a foreign planet, that could thus save the Earth's energy crisis once and for all. In reality, the two "entrepreneurs" share the morals of an alley cat and a desire to shake down as many venture capitalists as they can find, illustrated by their previous success: conning a series of international businessmen into buying shares of British national landmarks, as a means of rescuing the Brit economy. And in reality, the 'Explorer' doesn't even exist - it represents only the latest in an endless series of paper-thin manipulative schemes. To help pull this one off, Fiona and Trevor reel in a number of accomplices: Fiona's uncle, Lord William Arlington Spencer (Martin Kemp); techie and computer hacker Travis Marks (Stefan Booth), the son of William's Cambridge buddy Thomas Marks (Chris Barrie, and then Thomas himself. They plan to use the "invention" to wheedle billions out from under the noses of the Chinese - but fail to anticipate the interference of a nosy policeman (Dennis Waterman) or of an irate group of Russian mobsters, who - upon smelling a rat - demand to see the Explorer with their own eyes. -- (C) Rovi

Critic Reviews for Back in Business

There are no critic reviews yet for Back in Business. Keep checking Rotten Tomatoes for updates!

There are no featured reviews for Back in Business at this time.

Back in Business Quotes