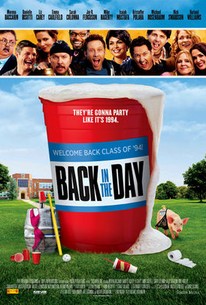 Back in the Day Photos

When Jim Owens makes a surprise visit to his high school reunion... all hell breaks loose. Hilarity ensues as he wrangles his now-married friends together for one last hurrah. Cruising the old strip, seeking vengeance on an old high school principal and nearly breaking up a wedding gets Jim into hot water with his friends and their wives. BACK IN THE DAY is written and directed by Michael Rosenbaum and stars Rosenbaum, Morena Baccarin, Nick Swardson, Harland Williams, Sarah Colonna, and Isaiah Mustafa. The film was produced by Kim Waltrip (Hit and Run, The Disappearance of Eleanor Rigby: Him and Her) of Kim and Jim Productions, and is also a Rose and Bomb Production. (c) ScreenMedia

Sara Giller
as Wife In Car

Steve Hudgins
as Guy In Bar

Matthew Ballard
as Husband In Car

Jenel Fontes
as Woman #1 at Reunion

Lezly Clayton
as Woman #2 At Reunion

Brian Schaum
as Man #1 At Reunion

Scott Schaum
as Man #2 At Reunion

Alexander Hahn
as Teen #2 In Car

Preston-Harris Dunlap
as Teen #3 In Car

Kevin Arnold
as Teen #4 In Car

Critic Reviews for Back in the Day

It's a film that feels like it's simply going through the motions-not to mention one whose ultimate critique of trying to relive the past is, in light of its mass of clichés, more than a tad disingenuous

[A] stale, schmaltzy and testosterone-drenched comedy.

Nostalgia needs to be grounded in something real, something true, in order for it to have any resonance. Otherwise, you're just left with a formula that was tired 20 years ago.

There are a lot of odious movies yet to come in 2014, no doubt, but they'll have to work to beat "Back in the Day" for awfulness.

Cloying and smug when it's not being unfunny and crass, the high school reunion comedy "Back in the Day" hits lows with a frequency that suggests a world-class sharp shooter or free-throw king.

Good for a couple of fart jokes and otherwise utterly forgettable.

There aren't many laughs along the way (unless you count fart jokes), nor is there any nostalgic value.

...the movie remains surprisingly watchable virtually from beginning to end.

Rosenbaum's intent seems pure enough, but his concepts for comedy and intimacy leave much to be desired, making the picture difficult to understand as it weaves through heartfelt confessions and fart jokes.

Audience Reviews for Back in the Day

Not often does Evansville see the return of a native son-turned-Hollywood Top Dog, so Showplace East was brimming with eager viewers on the night of Michael Rosenbaum's movie screening + talkback, hoping to rub elbows and share their I knew-you-whens. Not having watched much "Smallville" but always having been a fan of his chrome dome, I enjoyed Rosenbaum's Dane Cook-y stand-up persona which, albeit fratty, livened up the typical Q&A format. "Back in the Day" is a raunchy, nostalgic, coming-of-middle-age, high school reunion romp, and while that trope is trite, Rosenbaum brings some smart surprises to the lewd/scatological genre: the rude-nude-dude bouncing along in the pick-up truck and the slo-mo close-up of his giblets; the hiding in the shower dual vomiting scene, and my favorite, the homage to Hitchcock's "Psycho" shower scene with the illusory flash cuts and colored water going down the drain. The men are all pretty much the same, the women are also pretty much the same, and the small-town loser stereotypes are a bit stale, but Sarah Colonna plays a great wallflower with secret bondage fetish, Morena Baccarin is sassy and accessibly beautiful in a "regular girl" role, and Rosenbaum's likable straight man who does the honorable thing in the end is all the more impressive after having seen his real life dude-brah persona. The script does rely too much on flashbacks, but it was nice to see familiar Evansville and Newburgh scenery. The movie ends well with the half-patronizing but ultimately comforting thumbs up on Jim's ubiquitous insurance-shilling ads.

Back in the Day Quotes