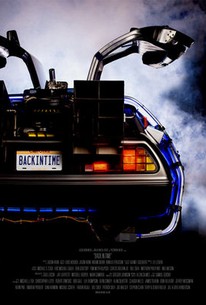 Back In Time Videos

Back In Time Photos

The documentary film Back in Time is, at its heart, a look at the very real impact the Back to the Future movies have had on our culture. What was once a little idea that spawned a tightly-focused documentary has grown into something truly amazing over two years of filming. Back in Time is a cinematic monument to the vastness of the trilogy's fandom. In addition to the footage and interviews revolving around the time machine itself, the crew found that simply by delving into the impact of the trilogy an epic journey began to unfold before them.

The Flux Capacitors
View All

Critic Reviews for Back In Time

It's a nice piece of work, this, although I couldn't say Back In Time is 100% essential viewing. But it's a warm companion.

Even if you're a die-hard fan of the trilogy who has seen just about every scrap of video about the movies, you'll find plenty to enjoy...

Coming out at the same time as Back to the Future Day has only hurt it, making it all the clearer that this scattered fandom doc has nothing special to offer its audience.

Audience Reviews for Back In Time

One point twenty-one gigawatts of fun, Back in Time is an entertaining documentary that looks at the making of Back to the Future and its lasting impact. Several of the filmmakers and cast members are interviewed and discuss how Back to the Future was developed and the effects that it's had on their lives and pop culture. In addition, a number of prominent fan communities (such as DeLorean enthusiasts) are featured and talk about what they've done to show their love of the film series. However, as interesting as this all is the structure's a little loose; sort randomly switching back and forth from to topic to topic without clear transitions. Back in Time has a few problems, but overall it's an enjoyable retrospective of a great film and it's devoted fandom.

all about fans and very little about the film history. I love the film and consider s modern classic. This film is good for viewing but as a film buff I was puzzled by the lack of franchise history.

A superb look at the cultural phenomenon that is Back To The Future. How it has impacted our lives and how it was created. With some unique footage of the early Eric Stolz scenes too, this is well worth watching if you enjoy Back To The Future.

Back In Time Quotes