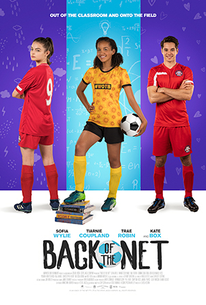 Back of the Net Photos

After hopping on a bus to Harold Soccer Academy instead of Harold Academy Australian Semester at Sea, science fanatic, Cory Bailey (Sofia Wylie) has no choice but to complete a semester at the soccer academy. Though unimpressed with being surrounded by "silly" jocks, it's not long until Cory embraces her roommates' hospitality and makes new friends. It's also not long until the school's superstar player, Evie begins to make life difficult for Cory. With the school hosting the National Soccer Tournament, Cory is determined to combine her science knowledge with her team's various skills to beat Evie's team in the finals.

Critic Reviews for Back of the Net

The cultural cringe afflicting the plot is pretty hard to take.

Back of the Net is an entertaining, if unremarkable piece of pre-teen fluff enlivened by entertaining performances, moments of likable charm and a refreshing message.

It's ironic that Back of the Net features a protagonist who operates life through the application of textbook formulas, because she's stuck in a film that's chosen to do the same.

An unrelentingly dull and joyless movie, Back of the Net blends trace elements of athleticism, academia and adolescent romance into a confection so thin and flavour-free, it dissolves immediately on impact.

There are no featured reviews for Back of the Net at this time.

Back of the Net Quotes