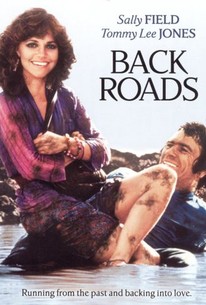 For his follow-up to 1979's Academy Award-winning Norma Rae, director Martin Ritt re-teams with that film's star, Sally Field, for this gritty romantic road comedy. Reportedly Ritt's homage to Frank Capra's films of the 1930s, Back Roads stars Field as Amy Post, a no-nonsense prostitute in the deep South struggling with the fact that she gave up her only child for adoption. When Amy first encounters the recently unemployed Elmore Pratt (Tommy Lee Jones), she is anything but fond of the drifter. But after taking to the road together with dreams of California, the two societal misfits find themselves falling for each other. Ritt and Field would team together once again four years later in another romantic comedy set in the South, Murphy's Romance.

Billy Jayne
as The Boy Thief
View All

Critic Reviews for Back Roads

You come out of "Back Roads" feeling more familiar with the configuration of Sally Field's spinal column and chestbone than the character she's struggling to embody.

Very good on local colour but a bit sugary in its attitude to the central relationship, it would have been better taking a bleaker cue from Tommy Lee Jones' admirably dry performance.

If the movie had been willing to deal honestly with the plight of its characters, it wouldn't need to be clutterted up with eccentrics and hearts of gold.

Less a movie than an extended sketch, and it's to the credit of Mr. Ritt, his stars and Gary Devore, the screenwriter, that the movie is so much fun.

Back Roads lacks originality and relies on the road trip movie genre. [Full Review in Spanish]

It's a surprise to discover that this hackneyed, relatively dull road picture is the work of director Martin Ritt.

Back Roads is a love story with real clout.

Despite the efforts of the two talented leads, their central relationship fails to ignite, while the comedy is lacklustre at best.

Audience Reviews for Back Roads

There are a lot of good actors in this movie, but the story lets them down. It's boring, predictable, and disappointing in the end. I didn't care for it, and I wouldn't recommend it.