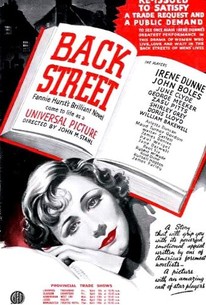 Based on a best-selling novel by Fannie Hurst, Back Street concerns an ill-starred couple, Rae (Irene Dunne) and Walter (John Boles). Rae meets Walter and falls hopelessly in love with him; Walter is also drawn to Rae, but he has already pledged to marry another woman and can't find a way out. They part, and for a while Rae takes up with someone else; Walter needs to leave the country and impulsively tries to arrange a marriage with Rae, but she is unable, due to her new beau, and he sails away without her. When Rae next encounters Walter, he has married a woman from a wealthy family. Even though he's wedded to another, a passion still burns between Walter and Rae, and they enter into an illicit affair. Over the course of nearly 30 years, Rae turns down opportunities to marry other men to live a shadowy life as Walter's mistress, until she accepts a proposal of marriage when she's convinced that Walter is finally through with her. This was the first of three film versions of Hurst's story; remakes were released in 1941 and 1961.

Critic Reviews for Back Street

There are no featured reviews for Back Street at this time.