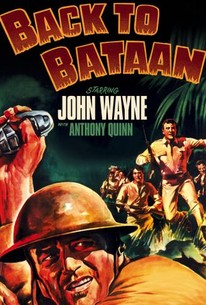 Back to Bataan Photos

Edward Dmytryk's Back to Bataan stars John Wayne as Colonel Joe Madden. After General MacArthur decides to follow his order and leave the Philippines, Madden agrees to stay behind and organize an underground resistance movement. Anthony Quinn plays Andres Bonifacio, a captain who falls in love with a local woman (Fely Franquelli) who helps the army keep their rag-tag forces as organized as possible. Bonifacio must also deal with the pressure of being the grandson of a beloved Filipino leader.

Critic Reviews for Back to Bataan

Quinn does a particularly outstanding job, as does Franquelli. Wayne makes a stalwart leader for the guerrillas, commendably underplaying the role for best results.

Back To Bataan has more excitement per reel than anything you've come across in some time and explodes the theory that war pictures are necessarily dated.

Wayne's paternal attitude (a father is reflected in his relationship with a boy from the Philippines, which some critics see as a testament to the American imperialistic and patronizing approach to weaker nations.

Weary wartime propaganda film with too much flag-waving.

Audience Reviews for Back to Bataan

WWII film about the Filipino resistance against the Japanese. Not a bad film with some good action, but has a little too much flag waving. I like the idea of the story, but it has too many dramatic moments that come off as a little hokey. Wayne and Quinn are good together, but overall just a run of a mill film for them so they are wasted.

Back to Bataan Quotes