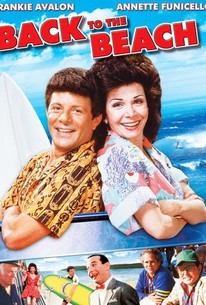 Back to the Beach Photos

Frankie Avalon and Annette Funicello not only starred in the delightfully "retro" Back to the Beach, but also served as executive producers. Appropriately set 25 years after such drive-in faves as Beach Blanket Bingo, the film finds Frankie and Annette as husband and wife, living far from the surf 'n' sand in Ohio. Heading to California to visit their daughter Lori Loughlin, Frankie and Annette are appalled to learn that she has been keeping time with punker Tommy Hinkley. In time-honored fashion, our hero and heroine set about to make the beach safe for funlovers everywhere by driving out Hinkley's unsavory pals. Along the way, Frankie nearly bollixes up his marriage by dallying with Connie Stevens-one of several pop-culture icons appearing in Back to the Beach, including Don Adams, Bob Denver, Jerry Mathers, Tony Dow, Dick Dale & the Del-Tones , Stevie Ray Vaughan, and even Pee-wee Herman! Back to the Beach is fun for a while, but its six-person writing team can't figure out a logical way to wind it all up.

Dick Dale
as Himself

Stevie Ray Vaughan
as Himself

Rodney Bingenheimer
as Himself

News & Interviews for Back to the Beach

View All Back to the Beach News

Critic Reviews for Back to the Beach

This movie absolutely blind-sided me. I don't know what I was expecting from Back to the Beach, but it certainly wasn't the funniest, quirkiest musical comedy since Little Shop of Horrors.

As fgood as taking a time-machine back to the 60's

A bouncy, high-energy spoof and one of the best movie musicals of the last couple of decades.

Silly, but with some great one-liners.

Face it, it just doesn't work

"Back to the Beach" is, by no means, a deep and thought-provoking motion picture, [but] when you're dealing with Frankie and Annette, what more could you ask for?

Audience Reviews for Back to the Beach

I saw this in the theatre and now I have Aids.

Back to the Beach Quotes