Back to the Future Part II1989 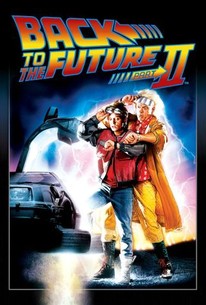 Critics Consensus: Back to the Future II is far more uneven than its predecessor, but its madcap highs outweigh the occasionally cluttered machinations of an overstuffed plot.

Critics Consensus: Back to the Future II is far more uneven than its predecessor, but its madcap highs outweigh the occasionally cluttered machinations of an overstuffed plot.

Critic Consensus: Back to the Future II is far more uneven than its predecessor, but its madcap highs outweigh the occasionally cluttered machinations of an overstuffed plot.

Back to the Future Part II Videos

Back to the Future Part II Photos

Things have barely settled from the excitement and resolve of the original Back to the Future, when in pops that crazy inventor Dr. Emmett Brown (Christopher Lloyd) with news that in order to prevent a series of events that could ruin the McFly name for posterity, Marty McFly (Michael J. Fox ) and his girlfriend are whisked into the future to the year 2015, where Marty must tangle with a teen rogue named Griff, who's obviously the descendant of Biff, the first Future film's bully. Marty foils Griff and his group when he jumps on an air-foil skateboard that flies him through town at rakish speeds with the loser bullies beaten again. Marty gets a money-making brainstorm before hopping in the time-traveling DeLorean, and he purchases a sports almanac. He figures that back in 1985 he'll be able to place sure-fire bets using the published sports scores of the games that are yet to happen. Unfortunately for Marty, Dr. Brown disapproves of his betting scheme -- he feels too much messing with time is very dangerous -- and he tosses the almanac. A hidden Biff overhears the discussion about the almanac, sees it get tossed out, and grabs it. Thus begins a time-traveling swirl to make the head spin. Biff swipes the DeLorean, heads back to 1955, and with the help of the unerring almanac, bets his way to power. The now-altered "Biff world" has turned into a nightmarish scene with Biff the mogul, residing in a Vegas-styled pleasure palace and running everything. It's all our hero Marty can do to pull the pieces together this time, as he must jump between three generations of intertwined time travel. The end of Back to the Future, Part 2 introduces its sequel as the zany professor has already time-dashed away to the Wild West of the late 1800s and invites Marty into a new adventure. ~ Rovi

Critic Reviews for Back to the Future Part II

While the funny-bone is being gently tickled, the eye is constantly diverted. Unfortunately, and I find this true of every Zemeckis movie, neither the mind nor the heart is ever fully engaged.

The most important point is that the new film is fun.

Fans of the original should relish going back to Back to the Future.

The story is incredibly complex, very well arranged and organized, and surprisingly cohesive despite so many jumps in time.

The likable cast and nods to the first movie are a lot of fun.

1989's middle entry, in which the pair head forward to 2015, is the most underrated -- like fellow second child Indiana Jones and the Temple of Doom, it had to contend with doltish charges of being too cold.

The best entry in the trilogy. [Full review in Spanish]

A time-traveling adventure that desperately missed the fun, joyous charm of the original.

Audience Reviews for Back to the Future Part II

Very futuristic and broad in direction, Back to the Future Part II is adventurous, even though it doesn't compare to the impact the first installment provided. Fox and Lloyd once again partner up and make a great team in Zemeckis' sci-fi picture. 4/5

Excellent part two to the triology. Doc takes Marty into the future to save Marty's kids, but they end up in a different parallel life due to Biff changing history back in 1950s. So they have to go back in time. Exciting ride, full of adventure. Doc gets lost in the past.

The second part to the Back to the Future trilogy is more confusing, cheesy, and hokey than the first one (especially the aging make-up), but it's still lots of fun. It's future scenes are definitely clunky, and are probably the most confusing of all the scenes in the movie. But when they have fun, so do we, and that's the whole point of this second part.

In my opinion, the BTTF sequel is superior to the first installment. The twisting and turning plotline may seem confusing to some but it is ultimately more rewarding. Also this may be the only time I've actually enjoyed mass product placement in a film.

Back to the Future Part II Quotes