Back to the Future Part III1990 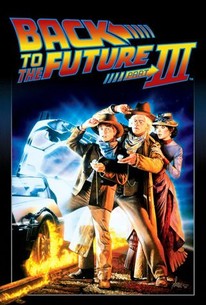 Critics Consensus: Back to the Future Part III draws the trilogy to a satisfying close with a simpler, sweeter round of time-travel antics.

Critics Consensus: Back to the Future Part III draws the trilogy to a satisfying close with a simpler, sweeter round of time-travel antics.

Critic Consensus: Back to the Future Part III draws the trilogy to a satisfying close with a simpler, sweeter round of time-travel antics.

Back to the Future Part III Videos

Back to the Future Part III Photos

The final installment in the Back to the Future trilogy picks up where the second film left off, but it casts off the dizzying time travel of the first two films for mostly routine comedy set in the Old West. Marty McFly (Michael J. Fox) receives a 70-year-old letter from his inventor friend, Doc Brown (Christopher Lloyd), who tells Marty that he has retreated a century in time to live out a relatively quiet life in the Old West. Doc Brown reveals that he hid his DeLorean car/time machine in an abandoned mine outside town, and when Marty does some research and discovers that the Doc died shortly after writing the letter, he decides to find the car, travel back in time, and warn the Doc about his demise. Meanwhile, the Doc, who has fallen in love with a local woman (Mary Steenburgen), realizes he can't hide in the past from the problems he has caused to the time flow in the previous two adventures. He reluctantly decides to return to the present with Marty, but first, they have to find a way to get the DeLorean up to time-travel velocity with a broken fuel line and no gasoline. ~ Don Kaye, Rovi

Leslie A. Prickett
as Celebration Man

Jo B. Cummings
as Pie Lady

Glenn Fox
as Boy with Gun

Kenny Myers
as Townsman #3
View All

News & Interviews for Back to the Future Part III

View All Back to the Future Part III News

Critic Reviews for Back to the Future Part III

It satisfyingly ties up the various plot strands that were flapping in the breeze from the last installment.

The only true surprise of this movie is how lazy it is.

A clever and enjoyable wrapping-up of the time-travelling adventures.

The simplicity of plot, and the wide expansiveness of its use of space, are a refreshing change from the convoluted, visually cramped and cluttered second part.

This is a good deal more likable than part two because the product plugs have been held back, and Zemeckis is clearly having fun alluding to his favorite westerns; there's also a certain sweetness and charm in the Lloyd-Steenburgen romance.

Repetition might be drab in any other franchise, but here it's absolutely hysterical.

Back to the Future Part III is an infinitely better picture than its predecessor. It's more coherent and streamlined. That's surprising, since parts II and III were filmed at the same time.

The inimitable Fox is again on cracking form as Marty McFly and Christopher Lloyd's romance with Mary Steenburgen is surprisingly touching.

It is a silly movie but I enjoy it and find it entertaining.

A good conclution for the famous trilogy, fun but not as good as the other two entries. [Full review in Spanish]

The weakest of the three, 1990's third entry is also the most conventional.

Audience Reviews for Back to the Future Part III

This time they go back to the wild west. Has plenty of action, and a nice change to the first two.

The third installment of Robert Zemeckis' fun-filled time-travel franchise tones down on its futuristic charm, and though different in many different ways, still is able to provide a fun ride for its audience. Back to the Future Part III presents Fox and Lloyd once again in their strongest form, possibly, in the entire series. 4/5

Entertaining and well put together but nothing special. Unlike the original entry, "Part III" doesn't warrant a repeat viewing. You watch it once, you're amused and there's no need to watch it again - or remember anything about it. It's not a bad film, it's one of the better "Part III" in the grand scheme of things. It's an extraordinary showcase for Christopher Lloyd - and the Western plot works better than "Part II"'s future plot. It could have used a bit more originality. Instead it just takes the earlier films construct and adds Western clichÃ (C)s to it. This final installment of the "Back to the Future" trilogy is a good wrap up it just not one that warrants a second watch.

The final installment of the BTTF trilogy is ultimately a disappointment, but an extremely enjoyable one.

Back to the Future Part III Quotes