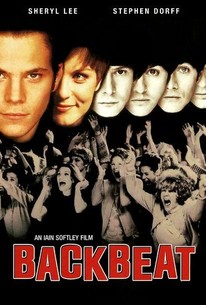 Critics Consensus: Its overly pretentious and melodramatic leanings notwithstanding, Backbeat explores the beginnings of the Fab Four with striking authenticity, soaring rock 'n' roll verve, and a strong admiration for its subjects.

Critics Consensus: Its overly pretentious and melodramatic leanings notwithstanding, Backbeat explores the beginnings of the Fab Four with striking authenticity, soaring rock 'n' roll verve, and a strong admiration for its subjects.

Critic Consensus: Its overly pretentious and melodramatic leanings notwithstanding, Backbeat explores the beginnings of the Fab Four with striking authenticity, soaring rock 'n' roll verve, and a strong admiration for its subjects.

The Beatles' early days as a struggling bar band are depicted in this fact-based drama, which tells the little-known story of original member Stuart Sutcliffe (Stephen Dorff). A close friend of John Lennon, Sutcliffe acts as the band's original bassist, accompanying them on their early gigs in Liverpool and Hamburg, Germany. The friendship becomes strained, however, when Sutcliffe falls in love with a German art student and starts to question his commitment to the band. With Sutcliffe's story taking center stage, the stories of the more famous Beatles largely fade into the background. The exception is John Lennon, thanks to a fierce performance by Ian Hart, who had previously portrayed the musician in the more intimate and provocative The Hours and the Times. While Backbeat does provide a new perspective on the band's beginning, and numerous opportunities for a group of modern rock musicians to recreate the band's energetic early performances, it never makes Sutcliffe's story seem more than a footnote to musical history.

Albert Welling
as Doctor
View All

Get back, get back to where you once belonged, you want to shout. But the movie is stuck in the wrong groove.

There's nothing very profound here, but we do at least get a nice handling of period and milieu, and pretty good performances of the songs.

What pulls you over the bum spots is the electrifying immediacy.

The early, pre-fame days of the Beatles are a great subject for a film, but the potential has been only partly realized in Backbeat.

The music is loud and raw, but nevertheless evokes the excitement it generated.

Iain Softley directs his feature debut with simplicity and feeling, and you don't have to have been a Beatles fan to get with the beat. Gives you hope for the British film industry.

When we have a comprehensive documentary available in the form of The Beatles Anthology, films like Backbeat end up serving as a moot point.

Why would anyone would want to see a movie about the pre-fame Beatles when the post-fame Beatles had enough drama and excitement to fill several movies.

Despite some meandering moments, this remains a unique experience.

It is the band, the group - with or without Sutcliffe - that makes Backbeat such a powerfully emotional elegy.

The film tells the story of the original, little-known fifth Beatle, Stuart Sutcliffe, a young painter with rock n' roll sensibility who in 1960 forgoes his promising art career to join his best friend John Lennon (nicely played by Ian Hart) in Berlin

This is an admittedly highly fictionalized version of the Beatles early days in Hamburg, but that is not the central theme of the movie. It's really about a love triangle between two best friends, and the woman they both are drawn to. There are a few great characters brought to life by a few very good performances by the actors portraying them, and that is what really drew me in. That said, any Beatles fan will also dig the stylized look at their early days. You can't really take it as fact, but you can have a hell of a lot of fun imagining that this is sort of the way it might have been.

Not just another film or story about The Beatles, this is the story of Stuart Sutcliffe; the fifth Beatle, his relationship with John Lennona and their time with the rest of The Beatles in Hamberg. Whilst being a fan (although not a die hard fan) of The Beatles, I knew very little of Stuart Sutcliffe, so this made for interesting viewing and also showed John Lennon in a slightly different light to most portrayals and the obvsious bond between the two of them.

This is an OK movie. I suspect it had difficulty deciding whether it was made as a documentary about the Beatles early years, or a story about the unfortunate life of Stuart Sutcliffe.

Good true life and tragic story of a musician and artist Stuart Sutcliffe in the early days of The Beatles in Hamburg. He was known as the 5th Beatles.