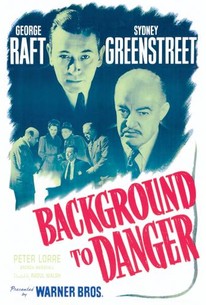 Eric Ambler's intriguing novel Uncommon Danger is brought down to a Republic serial level in Warner Bros.' Background to Danger. George Raft, who always seems miscast, plays an American undercover intelligence agent operating in Turkey. Sultry Osa Massen passes on some valuable secret papers to Raft just before she is killed. Our Hero then finds himself at the mercy of enemy agent Sidney Greenstreet, who knows that the papers contain Nazi plans to invade Turkey. Despite several brutal beatings, Raft and his cohorts Peter Lorre (a good guy for a change) and Brenda Marshall turn the tables on Greenstreet. Background to Danger was the first of many Warner Bros. follow-ups to the studio's megahit Casablanca; it's also the film wherein the prankish Peter Lorre stole George Raft's hat between takes--an affront that rankled the touchy Raft to his dying day. ~ Hal Erickson, Rovi

William Edmunds
as Waiter with Information

Critic Reviews for Background to Danger

Dull but inoffensive spy thriller might offer some light entertainment.

Audience Reviews for Background to Danger

There are no featured audience reviews yet. Click the link below to see what others say about Background to Danger!