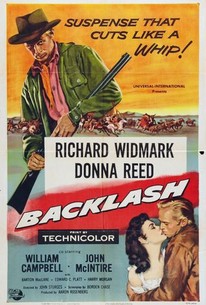 The breathtakingly beautiful Technicolor cinematography of Irving Glassberg is but one of the many small pleasures of the big-budget western Backlash. Set in post-Civil War Arizona, the film stars Richard Widmark as Jim Slater, who hopes to prove that his down-and-out father (John McIntire) was not involved in a gold robbery. To prove this, Slater has to find the money, which is also the goal of Karyl Orton (Donna Reed), the supposed widow of one of the thieves. Eventually, Slater discovers that his father is every bit as rotten as the law claims he is, though he can take some comfort in the fact that Karyl is now in love with him. As in his earlier Bad Day at Black Rock, Backlash director John Sturges is more concerned with building tension than with overt displays of wanton violence.

A lesser albeit still watchable Western from director John Sturges (The Magnificent Seven, Gunfight at the O.K. Corral).

There are no featured audience reviews yet. Click the link below to see what others say about Backlash!