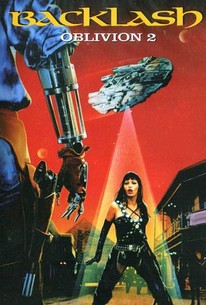 On the wild desert planet of Oblivion, a man called Sweeny comes to search for a corporate saboteur. Though deceptively dressed as a greenhorn city dude, Sweeny is the most effective bounty hunter in the galaxy. He stays in the town where she (he knows nothing about her) is supposed to reside. He finds plenty of suspicious women and even gets romantically involved with the widow Mattie Chase, stealing her away from her steady beau Marshal Adams. Like its predecessor, this feature attempts to create a fresh new genre by combining science fiction and western with comic elements.

There are no critic reviews yet for Backlash: Oblivion 2. Keep checking Rotten Tomatoes for updates!

There are no featured audience reviews yet. Click the link below to see what others say about Backlash: Oblivion 2!