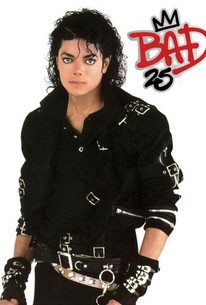 Chronicles the making of Michael Jackson's iconic, record-breaking Bad album and Michael's first world tour as a solo artist. Spike Lee examines Michael Jackson's creative vision for the album that ended up defining an era. Michael's lasting artistic legacy comes to life thanks to rare and never before seen footage and the vivid recollections of Michael's collaborators and confidants, such as Martin Scorsese who directed the 18-minute short film for the single Bad.

The posthumous campaign to polish Michael Jackson's tarnished reputation continues apace with this Spike Lee infomercial, commissioned by Sony and the money-grubbing Jackson estate to promote the 25th anniversary of his 1987 album "Bad.''

Though at times a tad worshipful, the film's tone is ultimately more awed than hagiographic, its commenters too cleareyed and candid to back away from negative publicity or public disenchantment.

Jackson fans will love Spike Lee's look back at the making of a classic, even if the extensive collection of clips and contemporary interviews - which could have used a firm edit - feels more suited to DVD.

It's baaad, and great.

Spike Lee has given the world the first tribute that fully measures up to Jackson the artist. Come on and get you sham on.

A tribute to the master craftsman and musical talent that was Jackson and not a penetrative investigation of the man who made the music.

[A] thorough and engaging exploration of the cultural phenomenon; a unique explosion in musical history, and insight into the loneliness of the performer, isolated in a fame bubble and devoured by the press.

Even if you stubbornly refuse to get down with the heavy, heavy grooves on this recording, you may in fact find a new appreciation for both the record itself and the musician behind the headlines.

A beautiful showcase of an influential artist in his prime at his creative best.

Spike Lee convincingly makes the case for reassessment with this exhaustive and entertaining if less-than-penetrating docu on [Bad's] creation.

When I watched Spike Lee's documentary "BAD25", I saw a humble, serious, determined artist at work. Lee uses the talking heads approach and well as much as I admired Jackson as a music artist, I didn't find anything special with what Lee was trying to present with this documentary other then to showcase archival footage fans hadn't seen before. For those hoping the picture will talk of Jackson's personal flaws, won't find it in this documentary. Bad25 is about an artist totally in control of his craft. One of the archival footage I did admired was watching Martin Scorsese directing Jackson, Wesley Snipes and dance choreographer Jeffrey Daniel for the music Bad. At times I was hoping Lee would show more and more footage of them but the clips is pretty standard and it's no different from viewing a behind the scenes footage one would find on DVD. Before going on set, Wesley Snipes mentions a few words about the character he portrays. Jackson and Daniels practising the dance moves for BAD late into the night and the well known breakdown of Jackson and his dancers addressing Snipes and his posse like preachers setting the wicked straight. I also admired of Lee showing Jackson's inspirations. From Fred Astaire, Grace Kelly, Bob Fosse, the old gangster pictures of the times, and the Vincent Mineilli film "The Band Wagon". I also admired watching the working relationship between Jackson and Siedah Garrett. Futhermore Tatiana Thumbtzen remembers working with Jackson's in the music vid "The Way You Make Me Feel". BAD25 also provides inteviews from Chris Brown, Mariah Carey (who was impressed with Jackson's acting skills in BAD), Sheryl Crow, Cee Lo Green, Andre Harell, Thelma Schoonmaker, Richard Price, L.A. Reid, Kanye West, Stevie Wonder, and Justin Bieber. Bad25 is good although the album is probably better.I felt "Michael Jackson's This Is It" set the mark. Shamone.