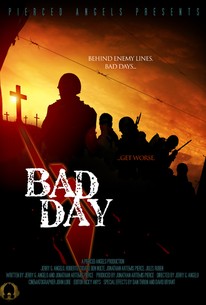 The year is 1942. The place - occupied France. Behind enemy lines, a young Captain must keep his band of brothers together with a unique blend of psyche, care, leadership and the ultimate sacrifice a man can make for his country. An unforgiving change of events causes a domino effect of bad luck, bad circumstance, and a hell of a lot of inner demons. Situation after situation tests the bonds of friendship and camaraderie begins to fray as the men doggedly try to find their way out of enemy territory. Sometimes the only way to keep from going insane is for each soldier to create more trouble for the group. A new leader, older, less seasoned and underdeveloped, must take the reigns, follow his instincts and lead the group, keeping the men together, taking them from one disaster into another as they try to make their way to the only place where they can get out of France. What is the breaking point? What can a soldier do when he is tested beyond his limit? What uncontrollable circumstance will shatter the will of the strongest man? A bonding like no other, true brotherhood in the making, rekindled friendships on the battle field, and fate. A BAD DAY, altogether unforgiving. There must be one little glimmer of hope that survives. There must... An ensemble cast led by brilliant team of writer/director Jerry G. Angelo and writer/producer Jonathan Artemis Pierce take you into the icy heart of winter in occupied France, 1942 in this intense World War II drama, featuring special effects from the award nominated team of Hero Visual Effects.

There are no critic reviews yet for Bad Day - WW II. Keep checking Rotten Tomatoes for updates!

There are no featured audience reviews yet. Click the link below to see what others say about Bad Day - WW II!