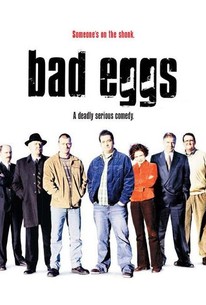 A pair of Melbourne detectives working in the Zero Tolerance Unit set out to uncover a web of corruption in the directorial debut of famed Australian comic Tony Martin. Though a highly publicized accident involving a dead magistrate quickly relegates dedicated lawmen Ben Kinnear (Mick Molloy) and Mike Paddock (Bob Franklin) back to lowly uniformed duty, the pair can't help but notice an odd link between the accident and the questionable business associations of a suspicious casino boss they had been investigating. Realizing that they can no longer accept the widespread corruption that surrounds them, Ben and Mike set out to bust the crooked casino hustler and rid their city of the criminal element. ~ Jason Buchanan, Rovi

There are no critic reviews yet for Bad Eggs. Keep checking Rotten Tomatoes for updates!

The film is quite funny, but considering the talented Molloy in the lead role, it fails to capture a consistent tone. The film plays out like a slapstick murder mystery early on and the tone is dark. You would class this as a dark comedy, but it isn't that dark, only some of the plot points of the storyline. I would say this is underwhelming and not the film I was hoping it would be. The talent in front of the camera attempt to breath life into the characters, but ultimately it struggles. Some funny beats and fun, but ultimately a film that fails with the concept and delivery. 01/04/2019