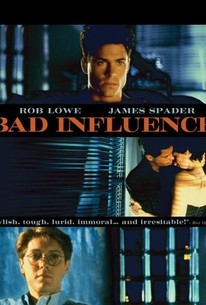 Successful LA marketing analyst Michael Boll (James Spader) seemingly has it all -- except a sense of self-confidence. Enigmatic drifter Alex (Rob Lowe) enters Michael's life and immediately begins to exert a negative influence. As Michael's self-esteem zooms (aided by generous dollops of sex and drugs) he allows himself to be dragooned into a life of crime by the demonic Alex. The "doppelganger" aspects of Bad Influence, and the film's many unexpected twists and turns, echo films of Alfred Hitchcock, especially Strangers on a Train. The film's boldest stroke is to cast the likeable Lowe as the bad guy (albeit a charming one) and the often villainous Spader as the malleable milquetoast.

Jeff Kaake
as Man in Bar

Bad Influence takes mostly predictable steps and tries to wrap up a forgotten subplot with some quick dialogue. It's also hard to watch Lowe make inside jokes during a movie with no substantial female characters -- the women are all props or plot devices.

The movie sneaks up on you.

Before becoming heavy handed, Bad Influence is almost worth rooting for.

Lowe's surface performance is distracting and eliminates much of the suspense necessary to keep this sort of grasping Hitchcock wannabe afloat.

...improves substantially once Alex drops his charming facade and becomes a flat-out villain...

The production values give a sense that the movie was quickly and haphazardly put together.

Features Rob Lowe at his most creepy

Lowe and Spader deliver some great work in this fairly familiar, yet still enjoyable, thriller.

a down hill point in Rob Lowe,

Awesome movie. There's a nice buildup of Lowe's character Alex. It makes Alex seem like a great guy after he stands up for Michael, and they have a nice friendship together, until the relationship slowly spirals into an out of control life or death situation. The pacing of this movie is perfect; not too fast and not too slow. There aren't any boring parts either, which I'm very thankful for. Nothing worse than watching a boring movie. Both characters are likable (at least until Lowe's true character is established), and they both have qualities that make them seem like real individuals. The development of Spader's character was great. I like seeing a character evolve into a completely different one by the end of a movie. It was a slow transition from shy/passive office worker to aggressive/violent gunman, but it worked. It was awesome. It was a very cool movie to watch.

Two of the hottest actors of the 80s finally star in a movie together! I was so excited to see this on TV that day, it was so awesome. Not only did it have good actors, but the story is good, and it's very exciting. I really liked this movie.