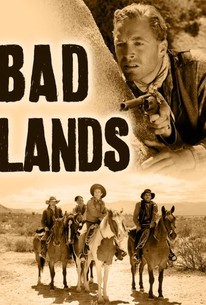 Bad Lands is a remake of John Ford's The Lost Patrol, with the locale changed from the Mesopotamian to the Arizona desert. The year is 1875: A posse headed by sheriff Robert Barrat is held at bay by Apache warriors. Following the pattern established by the Ford film, the posse members are decimated one by one, until only Barrat is left. Not content with merely changing the location and time-frame, scriptwriter Clarence Upson Young added a subplot involving a much-coveted vein of silver ore. This contrivance aside, Bad Lands is a worthy revision of the original Lost Patrol, though not quite as good as such later WW2 variations as Bataan and Sahara.

There are no featured reviews for Bad Lands at this time.