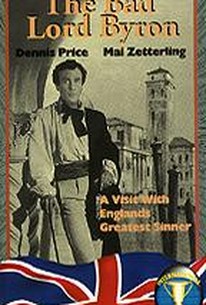 George Gordon, aka Lord Byron, the clubfooted 19th-century poet with the uncontrollable libido, is played by Dennis Price in this lavish British chocolate-box epic. From the vantage point of his deathbed, Byron recalls his life and many loves, imagining that he's pleading his case before a celestial court. Joan Greenwood looks like she's just stepped out of a portrait frame as Lady Caroline Lamb (whose own sordid story would also be filmed in due time). Her performance is far more persuasive than that of Dennis Price, who seems less libertine than precocious as Byron. Roundly ridiculed by British film critics in 1949, The Bad Lord Byron has stood the test of time -- not really a classic, but an acceptable rainy-day wallow. ~ Hal Erickson, Rovi

Richard Molinas
as Gondolier
View All

There are no critic reviews yet for Bad Lord Byron. Keep checking Rotten Tomatoes for updates!

There are no featured reviews for Bad Lord Byron at this time.