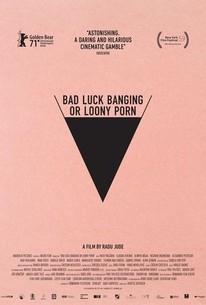 Florin Petrescu
as Axinte as parent

Alex Bogdan
as Parent with money

Marcela Motoc
as Mother in Apartment

Serban Pavlu
as Father in Apartment

Victor Yila
as Parent
View All

"Bad Luck" couldn't arrive at a more opportune time to needle those so eager to pass judgment on anyone other than themselves.

An eyeball-slicing polemic by a bomb-throwing provocateur.

Amid so many earnest, forgettable COVID-era and COVID-acknowledging movies around the world, here's one that truly goes for it.

It is surprisingly subtle, and has pointed things to say about society and hypocrisy.

Neither for the intellectually timid nor the prudish, Radu Jude's romp through cultural hypocrisy and the human penchant for being not just cruel, but also idiots, is designed to confront and confound with savage humor and brutal satire.

Nonetheless, his movie has a kind of undeniable, anything-goes chutzpah, as well as a finger on the pulse of how easily public discourse and personal tempers wax hysterical these days...

While Bad Luck Banging is definitely art house, nobody can accuse it of being bland or forgettable...

The film's shock ending [is] the best of the year.

Radu Jude's latest is a scathing send-up of nationalism, sexism, and the ways people are absolutely losing their minds during the pandemic.