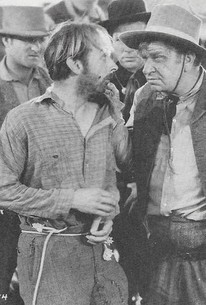 Wallace Beery plays one of his patented good bad guys in this MGM Western. "Trigger" Bill (Beery) is an outlaw with a heart of gold who discovers that his estranged son Jeffrey Burton (Dennis O'Keefe) has become a prizefighter. In his attempts to get Jeffrey out of the ring and into law school, Bill reforms and gives up thieving. When the villainous "Blackjack" McCreedy (Bruce Cabot) tries to interfere with Bill and Jeffrey's lives, however, Bill must return to the way of the gun. This film was initially released in a sepia-tone tint; most prints now available are in black-&-white.

The Bad Man of Brimstone is Wallace Beery as you like him.

Bad Man of Brimstone is large-scale hokum, but there are moments when you can't help liking it.

There are no featured reviews for Bad Man of Brimstone at this time.