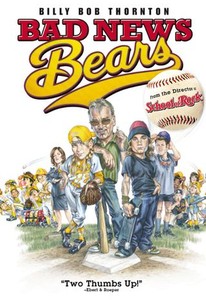 Critics Consensus: This too-faithful remake aims low for laughs, turning off the easily offendable; despite another lovably irascible contribution by Thornton, it lacks the ensemble strength and originality of the 1976 version.

Critics Consensus: This too-faithful remake aims low for laughs, turning off the easily offendable; despite another lovably irascible contribution by Thornton, it lacks the ensemble strength and originality of the 1976 version.

Critic Consensus: This too-faithful remake aims low for laughs, turning off the easily offendable; despite another lovably irascible contribution by Thornton, it lacks the ensemble strength and originality of the 1976 version.

A washed-up ballplayer is put in charge of a pack of kids scarcely more mature than himself in this remake of the 1976 comedy hit. Morris Buttermaker (Billy Bob Thornton) is a former major league baseball player whose career and life has hit the skids thanks to his overwhelming fondness for booze and women. Needing a break, his lawyer (Marcia Gay Harden) arranges for Buttermaker to take on coaching responsibilities for the Bears, a Little League baseball team comprised of a handful of hapless losers. As Buttermaker tries to groom his young charges into a winning team, he also gives them a glimpse of his hard-living lifestyle while they gear up to take on perennial rivals the Yankees and their arrogant Coach Bullock (Greg Kinnear. The 2005 version of The Bad News Bears was written by Glenn Ficarra and John Requa, who previously scripted another Billy Bob Thornton vehicle, Bad Santa. ~ Mark Deming, Rovi

Shannon O'Hurley
as All American Mom

Hunter Cole
as All American Boy

Wil Myer
as All American Boy

Gary A. Rodriquez
as Umpire

The best reason to see Richard Linklater's wholly unnecessary but highly enjoyable remake of The Bad News Bears is Billy Bob Thornton, who's doing a PG-13 version of his Bad Santa.

Fortunately almost everyone acquits himself coolly and admirably.

Billy Bob Thornton has proven he can do pretty much anything, but he simply does not look haggard, washed-up or miserable enough to be a believable Morris Buttermaker, the role Walter Matthau immortalized.

This hasn't the advantage of seeming so new, nor so shocking. It mixes cute and crass with a dollop of social critique.

Despite the lack of a vital air-punch from a curiously flat finale, there's much to love and laugh at.

[W]hen one character looks down at a can of beer and remarks, 'Non-alcoholic? What's the point?' it feels a bit like the film is unknowingly judging itself.

An amiable enough remake of the 1976 classic that is helped greatly by some very funny work by Billy Bob Thornton.

Having cast a knowing eye on teen debauchery in Dazed and Confused and coaxed a stellar performance out of Jack Black in School of Rock, the director is just the man to launch a surprise spitwad attack in the current culture wars.

If you're looking for another Adam Sandler/Jack Black comic masterpiece, this isn't it. It is, though, Billy Bob Thornton at his best, dropping analogies that would make a Hooters waitress blush.

This remake is better than I expected, and, even though it's Linklater, I really wasn't expecting much. Morris Buttermaker is a washed-up boozy exterminator who once had a career as a minor league baseball player (with a very, very short stint in the majors) who agrees to coach a lousy team of misfits, if only because he needs the paycheck. Yeah, it's the typical underdog sort of scenario, but with a twist. It's also pretty faithful to the original, even recreating some scenes almost note for note. It does enough to stand out on its own with some of the changes it makes, and that's good. Essentially it's a filtered version of Bad Santa to a degree, but even then it's surprisingly watchable and enjoyable. Thornton delivers the sort of performance you'd expect given the character, and I liked him, even though he's not supposed to be likable. The team is a motley crew of typical misfits, but they deliver decent performances that rise above the ranks, making characters that stand out from the norm of this sort of scenario. Of the kids, my favorites include the late Sammi Kane Kraft as ace pitcher (and token girl) Amanda, Timmy Deters as the pint-sized foul mouth Tanner, and Troy Gentile as the wise-cracking wheelchair bound Matt Hooper. As for the other adults, Greg Kinnear is okay as the rival coach who personifies the parent that overvalues winning, and Marcia Gay Harden is giving the thankless role of the ACLU-minded hardworking mom who thinks all kids should be given a chance at everything, just because. The film has some of the expected sports movie cliches, but ultimately avoids being a paint-by-numbers affair. I also liked that, while it is sort of aimed at a younger audience, it doesn't pull punches, and easily earns the PG-13 rating, with some of these kids being hilariously edgy right along with Thornton. One of my favorite examples of this is when he offers the kids non-alcoholic beer as a celebration, and Tanner comments, "Non-alcoholic beer? What's the damn point?" That's pretty funny. Better than it has any right to be, this is a pretty decent film. Yeah, it has the smell of familiarity all over it, but Linklater is a smart filmmaker, and while he clearly has reverence for the original, he smartly does enough to set his remake apart and make it relatable to contemporary audiences. Give it a go.

I enjoyed this remake of Bad News Bears, although not as memorable as the original, this film still has plenty of enjoyable crazy moments. The cast do a pretty good job and the film is pretty funny I very much enjoyed this film and it was lots of fun to watch. Billy Bob Thornton delivers a good comedic performance, and he is perfect for the part. The film is a must see for people who want something enjoyable, and Bad News Bears delivers memorable comedic moments. Sure the film has its downside, but it's far better than the remake to The Longest Yard. The film for the most part succeeds at making you laugh, and the jokes are very funny. This is a better remake than what most people would care to admit, and like I stated before, it's better than The Longest Yard remake, which was a total comedic failure. Of all the comedies starring Billy Bob Thorn, this film and Bad Santa are his best. This is in my opinion an underrated comedy, and it does deserve some credit as a film that has lots going for it. The film is much better than most comedies and remakes for that matter, and that says something. If you enjoy the sport, and want to watch something funny, then Bad News Bears is the perfect film to watch. The film is not as memorable as other baseball comedies such as Major League, The Sandlot or the original Bad News Bears, but it's still a worthy viewing nonetheless.

It was a good try and Thorton did a really great job as coach, but in the end its not as good as the original.

I love the naughty side of Billy Bob and that seems to come out in films with kids, Bad Santa, Mr Woodcock .... and this one is no different. Yes this is underneath, a typical American feel good kids film, but Thornton offers that not so subtle twist!